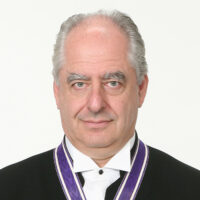 Resist the Single-Point Perspective! Drawings as Performances in Two, Three and Four Dimensions

Mr. Kentridge introduces traditional drawing techniques into animation, video projection and other media to develop a new medium for art in which these elements fuse together in multiple ways, thus creating an original world to express poetically his deep insights into society and human existence.

Mr. William Kentridge is an active visual artist born and based in Johannesburg, South Africa, whose wide-ranging activities encompass stage direction and writing. After studying political science at university, he became involved in theater and film production. In the late 1980s, while he was in his late 30s, he began creating his signature animated films called “drawings in motion.” These animated works reflect the history and social circumstances of South Africa, where he continues to live and work. One of his early creations, a series of films featuring the character Soho Eckstein, relates the history of his home country with the pains it inflicted. This series drew worldwide attention as an artistic expression resonating with postcolonial criticism.

Using a simple technique that he himself calls “stone-age filmmaking” – namely, the laborious process of filming, frame by frame, a series of ceaselessly changing charcoal and pastel drawings – Mr. Kentridge has injected the traditional technique of drawing into diverse media, including animation, video projection and stage set design. Thus, he has created a new contemporary vehicle of artistic expression within which various media fuse together in multiple ways. His works deal with the history and social circumstances of a specific geographic area, but have acquired universality in the fact that, through his deep insight and profound reflection on the nature of human existence, they afford opportunities to consider the fundamental issues that could face any individual in the world.

Underlying his works and activities is a determination to examine the universal issues confronting modern people. He accomplishes this by traveling back through the history of visual expression, persistently questioning such issues as the ways in which people may build a relationship with the world, the ambiguities of goodwill and oppression, and the conflicting and ambivalent disposition of the individual. While remaining in the remote country of South Africa, Mr. Kentridge continues to make a great impact on contemporary art in Western society. His world, full of sharp intelligence and profound poetry, exerts great influence on other artists – and provides individuals worldwide with courage and hope that their attempts and practices may still be effective and fundamental even amid the stagnation of our contemporary society, swirling with political and social unrest.

For these reasons, the Inamori Foundation is pleased to present the 2010 Kyoto Prize in Arts and Philosophy to Mr. William Kentridge.