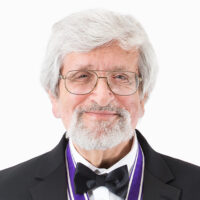 Dr. Taruskin has pioneered a new dimension in Western music culture through musicology research that transcends conventional historiographical methodologies, issuing sharp critical analysis backed by exhaustive knowledge of many diverse fields. His unrivaled perspective has significantly influenced both performance and study, elevating the importance and creative value of critical discourse to the music world.

Dr. Richard Taruskin is a musicologist and critic whose revolutionary approach to early music, modern Russian music and Western music history inspires and fascinates music scholars and music lovers worldwide.
Born in New York in 1945, Dr. Taruskin studied the Russian language at Columbia University before furthering his musicological studies at its graduate school. He joined its faculty after earning his Ph.D. In the 1980s, while writing for The New York Times, other newspapers and academic journals, he provocatively asserted that contemporary performances of early music were not true examples of “authenticity,” as was commonly claimed, but rather reflections of late 20th century aesthetics. This argument influenced the performance world of early music and even today, Dr. Taruskin’s argument underlies the varied approaches these performances tend to take.
Dr. Taruskin has left an even larger mark in the music world through his Russian music research. His books on Russian Opera, Mussorgsky and Stravinsky for example, spawned from a revolutionary method of detailed analyses alongside extensive study of contextual circumstances, including folkloristics, have radically reshaped our image of the original composers—and updated the methodology of musicology research itself.
His 6-volume The Oxford History of Western Music (2005), focusing exclusively on music in the Western literate tradition, represents a literary landmark in musicology and perhaps the largest overview of music history ever written by a single author. Under the influence of ethnomusicology and historiography which has critical approach to the writing of histories, Dr. Taruskin critically overstepped the description method based on some aesthetic and/or historical universality. He presented an enormous amount of descriptive evidence that Western music history written under homogeneous standards actually consists of an aggregation of historical matters that are minuscule and heterogeneous. His deep knowledge of diverse cultural fields allows him to make an incisive analysis of the literate tradition of Western music in the socio-cultural context. Every chapter of his first-edition Western musicology history, which exceeds 4,000 pages, is both thrilling and illuminating.
Dr. Taruskin’s critical practices and deep academic insights have changed music as we know it, pioneering a new realm of music research which can go beyond the boundary between conventional criticism and musicology, and between historical musicology and ethnomusicology.
The quality and volume of his work reveal that in music, creativity can be found not only in composition and performance, but also in meticulous discourse contextualizing the art—and that this, in itself, can contribute significantly to the world’s music cultures.
For these reasons, the Inamori Foundation is pleased to present the 2017 Kyoto Prize in Arts and Philosophy to Dr. Richard Taruskin.