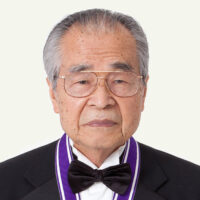 Theory and Reality of Evolutionary Biology

Dr. Masatoshi Nei made it possible to discuss evolutionary divergence, genetic diversity, and the mode of selection on genes in a quantitative manner by devising diverse statistical methods such as Nei’s genetic distance, and applying them to molecular data. Using these methods, Dr. Nei’s research has yielded important contributions to molecular evolutionary biology, as well as many other academic disciplines including ecology and conservation biology.

Dr. Masatoshi Nei contributed greatly to the transformation of evolutionary biology into an exact science by developing diverse statistical methods to analyze variations in proteins and DNA nucleotide sequences. Evolution occurs through the repeated appearance of novel mutations that propagate within a population and ultimately replace earlier genes. Dr. Nei’s methods of analysis facilitated a quantitative study of genetic variation and evolutionary time—yielding an understanding of evolutionary phenomena based on molecular data for a wide range of species, from unicellular organisms to human beings, in three major ways.

First, Dr. Nei developed “Nei’s genetic distance,” which quantifies differences between populations in terms of allele and allozyme frequencies. Genetic distance has made it possible to estimate migration rates between populations, and to know the time of splitting of populations or species. Using this principle, Dr. Nei solved a major evolutionary question by estimating the divergence time of three major genetically differentiated human groups—Caucasoid, Negroid and Mongoloid—using genetic distance based on protein polymorphism. He also developed a series of new methods, including GST (the coefficient of gene differentiation) and nucleotide diversity. With these techniques, Dr. Nei’s work became instrumental for refining the measurement of evolutionary differentiation and genetic diversity within and between populations.

Third, Dr. Nei improved a method of estimating the rates of nucleotide substitution, for substitutions that change an amino acid and for those that do not, separately. Thus, the method became easier to use and gained widespread popularity. Dr. Nei showed that comparisons between two substitution rates could reveal the evolutionary mechanism of genes. One notable application of this technique was his demonstration of “positive selection” in the MHC gene cluster, which serves to maintain high genetic diversity.

Many analytical methods developed by Dr. Nei have contributed not only to evolutionary biology but also to a broad range of other academic disciplines, including ecology and conservation biology.

For these reasons, the Inamori Foundation is pleased to present the 2013 Kyoto Prize in Basic Sciences to Dr. Masatoshi Nei.