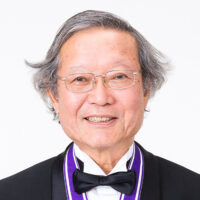 Outstanding Contributions to a Broad Spectrum of Modern Mathematics: Advancement of D-module Theory from Its Foundation

Dr. Kashiwara established the theory of D-modules, thereby playing a decisive role in the creation and development of algebraic analysis. His numerous achievements—including the establishment of the Riemann-Hilbert correspondence, its application to representation theory, and contribution to crystal basis theory—have exerted great influence on various fields of mathematics and contributed strongly to their development.

Dr. Masaki Kashiwara has numerous outstanding achievements including the theory of D-modules, which forms the core of algebraic analysis. Developing this theory from its foundation, he applied it across various fields of modern mathematics.

One of his most remarkable achievements is the construction of the Riemann-Hilbert correspondence. To each linear differential equation is associated the concept of monodromy group, a topological datum which measures the multi-valuedness of its solutions. The Riemann-Hilbert problem asks the converse, namely whether there exists a linear differential equation which has a given monodromy group. It had been solved affirmatively in dimension one. The case of higher dimensions had been a longstanding issue, to which Dr. Kashiwara provided an ideal answer in terms of D-modules (2, 3). This is a beautiful synthesis of geometry, algebra and analysis. Dr. Kashiwara and his collaborator were one of the two research groups who solved the Kazhdan-Lusztig conjecture as an important application of the Riemann-Hilbert correspondence to representation theory (4). Furthermore, the collaborative research on the extension to infinite dimensional Lie algebras (5, 6) became a key step in completing the Lusztig program on representations of algebraic groups in positive characteristic.

Dr. Kashiwara has made a wide range of contributions, often collaborating with many coauthors. Some of his outstanding achievements include developing microlocal analysis of sheaves (9, 10). Even today, he continues to contribute to his field with important results such as the extension of the Riemann-Hilbert correspondence to irregular singularities (11).

For these reasons, the Inamori Foundation is pleased to present the 2018 Kyoto Prize in Basic Sciences to Dr. Masaki Kashiwara.