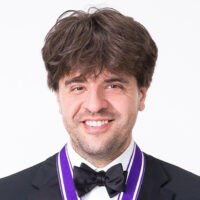 Optogenetics: Studying Proteins from Single-celled Algae to Illuminate the Mysteries of the Brain

Causal Approaches to Brain Functions Through Optogenetics and Beyond

Place：Tetsumon Memorial Auditorium, Faculty of Medicine, The University of Tokyo

Discovery of Optogenetics and Development of Causal Systems Neuroscience

Dr. Deisseroth focused on microbial light-activated proteins such as channelrhodoposin of green algae and spearheaded “optogenetics”—a new methodological discipline in which neurons can be activated or inhibited on the millisecond scale using light. This achievement has revolutionized the field of systems neuroscience, enabling causal study of neuronal assembly activity and resulting function, beyond correlational studies.

Dr. Karl Deisseroth has spearheaded “optogenetics,” a new methodological discipline in which cellular activity is controlled by light, and has revolutionized systems neuroscience research. As a result, he has successfully developed a novel and universal technique to manipulate brain activity at the circuit level and causally manipulate dynamic cellular ensemble activities to demonstrate their necessity and sufficiency in brain functions.

Before optogenetics, systems neuroscience research was primarily based on correlation between neuronal activities and animal behaviors. To address their causality, a variety of techniques were tried also in conventional methodologies, however, the optogenetic method has been transformative in that it can activate and inhibit, with a time resolution of milliseconds, activities of specific neurons identified by molecular markers. He has, to date, made three essential contributions to the field of optogenetics.

Firstly, he demonstrated that channelrhodopsin-2, a light-activated ion channel of green algae, is a molecular device that can control action potential firing in the mammalian brain on the millisecond scale (1). This proved to be a groundbreaking discovery. Successively, he and his colleagues improved in optogenetically evoking and suppressing neural firing by modifying the molecule, or through developing new actuator molecules (2–5, see also 6, 7). Furthermore, by making full use of genetic engineering , he made it possible to study neuronal circuit dynamics in brain regions of interest in vivo (8, 9). More than a thousand laboratories around the world thus begun to perform manipulative interrogation of neuronal circuits. The optogenetics led to more frequent use of rodents as animal models in systems neuroscience research.

Secondly, by utilizing the capability of optogenetics to artificially trigger brain activity, he and his collaborators implemented optical intervention as a means for elucidating higher brain functions, such as learning and memory (10), fear and anxiety (11), reward and pleasure (9), as well as decision-making (12). Although there is no guarantee that all the optogenetically-inducible neuronal activities correspond to naturally-occurring brain activities, optogenetics has demonstrated that a particular activity pattern of neuronal ensembles is sufficient for the execution of a particular brain function, thus providing a novel framework for a causal systems neuroscience.

Thirdly, he obtained data which reinforce the hypothesis that the pathological basis of various neurodegenerative diseases and psychiatric disorders lies in the malfunction of neuronal circuit activity. This consequently led to recent expansion of CNS drug screen targets from “specific molecular pathways” to “pathology-associated neuronal circuit activities”, paving the way for new drug discovery (13, 14).

Dr. Deisseroth not only led innovative research during the early period of the optogenetics but also shared the resources or experimental protocols with the research community and intensively disseminated them. The results of his research have been published in numerous journals, and he has been honored with many awards. On his own, Dr. Deisseroth has also co-founded a drug discovery startup focusing on the utilization of the optogenetics. He also organizes many workshops or training courses in his laboratory, where he welcomes young researchers aspiring to study optogenetics. All these efforts have helped spread the technological advance and have tremendously contributed to pushing the frontiers of neuroscientific research.

For these reasons, the Inamori Foundation is pleased to present the 2018 Kyoto Prize in Advanced Technology to Dr. Karl Deisseroth.