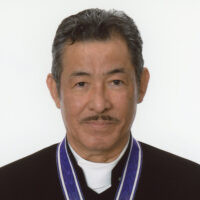 One Life, One Thread, and One Piece of Cloth: The Work of Issey Miyake

Mr. Issey Miyake, with his originality, has recaptured the relationship between plane fabrics and the three-dimensionality of the human body and formulated the epoch-making concept of “a piece of cloth (A-POC)” rooted in Eastern culture. Applying this concept and cutting edge technology to his designs, he has been creating clothing that can become a part of people’s lives, cutting across time, national borders, and classes.

Mr. Issey Miyake, with his originality, has recaptured the relationship between plane fabrics and the three-dimensionality of the human body, and formulated the epoch-making concept of “one piece of cloth” rooted in Eastern culture. Applying this concept and cutting edge technology to his designs, he has been creating clothing that can become a part of people’s lives, cutting across time, national borders, and classes.

In the 1970s, Mr. Miyake studied foldable forms, a characteristic of Japanese clothing and craftwork, as typified by the Japanese kimono and origami, and started incorporating these concepts into his designs. He applied the three-dimensional property of pleats to cutting and created flat foldable clothes, and in 1993, he launched “PLEATS PLEASE” which do not restrict body movement, while still maintaining their form. With “A-POC” since 1998, by using cutting edge weaving techniques, Mr. Miyake has been able to weave designs and forms into the fabric itself and introduced the epoch-making concept that tube-shaped woven cloth is complete in itself as clothing. By developing these methods, Mr. Miyake brought innovation to clothing production, presenting an ideal for clothing designs, and also proving such clothing can be mass-produced for everyone. Through these approaches he created designs that are not restricted by the limitations of East and West, time, nationality, and social strata. In this way, he has introduced an ideal form of clothing for the new era, as opposed to conventional clothing that is bound by stereotypes.

Mr. Miyake has also had a great influence on other areas of art. He designed costumes for ballets choreographed by Maurice Béjart and William Forsythe and made considerable achievements in this field. His designs have also been introduced around the world for their aesthetic value and are regarded as art characterizing the late 20th century. He held an exhibition entitled “Issey Miyake Making Things” at the Cartier Foundation, Paris; Ace Gallery, New York; and the Museum of Contemporary Art, Tokyo from 1998 to 2000. He also participated in the exhibitions, “Energies” at the Stedelijk Museum, Amsterdam in 1990, and “Big Bang” at the Pompidou Centre, Paris in 2005.

As 20th century art moved beyond and transcended traditional genres, Mr. Miyake’s accomplishments made possible the recognition that clothing designs are, without doubt, a legitimate art form. He has been seeking the meaning and ideal forms of clothing and has incorporated old traditions, cutting edge technology and Eastern and Western forms into clothing. Furthermore, his broad-ranging activities have not only had an enormous influence on other art genres, but also proved that clothing design is an excellent medium of expression in contemporary art, and elevated clothing production to a philosophical level.

For these reasons, the Inamori Foundation is pleased to present the 2006 Kyoto Prize in Arts and Philosophy to Mr. Issey Miyake.