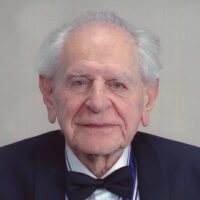 How I Became a Philosopher without Trying

A philosopher symbolizing the open spirit of the 20th century who has exerted an enormous influence on the formation of the modern intellectual climate, not only in the particular realm of philosophy, but also those of cultural and social sciences, and even that of natural science. He has continued to grasp unerringly the import of new modes of societal development and his “critical rationalism” presents the possibility of disproof as the distinguishing feature of scientific thinking.

＊This field then was Field of Philosophy (Philosophical thoughts of the 20th century).

Sir Karl Raimund Popper is a philosopher of the orthodox school whose concepts have attained a degree of eminence and influence befitting the status of a representative exponent of 20th century philosophical thought. The critical rationalism of Sir Karl rejects all forms of dogmatism and is characterized by consistently flexible and receptive reasoning.

In the philosophy of science, which is the central area of his achievements, Sir Karl has criticized inductive scientific theories and expounded incisive arguments to the effect that scientific laws are universal assertions which cannot possibly be completely verified on the basis of individual facts but, conversely, can be completely refuted by even a single counter-example. Hence, the distinctive characteristic of scientific knowledge consists not in verification but rather the possibility of refutation, that is, of criticism.

Thus, Sir Karl has established the viewpoint known as “critical rationalism,” emphasizing the importance of critical activity in science and other human cognitive spheres. From this viewpoint, Sir Karl has developed a philosophical world known as evolutionary epistemology as well as presenting a multitude of superb original theories, advocating the reality of a world of objective rational content (third world) which should be distinguished from both the physical world (first world) and the psychological world (second world).

On the other hand, Sir Karl has devoted profound consideration to the circumstances of the Second World War, published the celebrated work “The Open Society and Its Enemy,” and assumed a position of thorough confrontation with both left and right-wing totalitarianism. The principal target of his scathing proposes the possibility of predicting the future of humanity through comprehension of the laws governing historical development, that is, the ideology of “historicism” as represented by Hegel and Marx. Sir Karl has rejected the “closed society” engendered by this ideology, and has advocated a field of “gradual social engineering” based upon insight into the true nature of humanity with a view to the creation of a free democratic society.

Thus, amidst the intellectual confusion characteristic of the present century, the philosophy of Sir Karl has clearly elucidated the basis of science as well as providing reliable guidelines for the ideal form of new social development, and has manifested a major influence not only upon the specialized sphere of philosophy but upon a broad spectrum of front-line intellectuals in fields ranging from natural science to the humanities and social sciences.

This record of brilliant research achievements duly attests to the preeminent qualifications of Sir Karl Raimund Popper as the laureate of the 1992 Kyoto Prize for Creative Arts and Moral Sciences.

1934
Logik der Forschung
1945
The Open Society and Its Enemies
1963
Conjectures and Refutations
1972
Objective Knowledge
1977
The Self and Its Brain
1983
The Open Universe: An Argument for Indeterminism