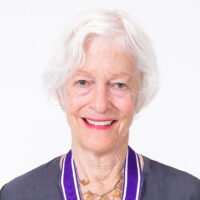 In the Shadow a Shadow

Radicalism of Performance and Media Art—Joan Jonas and the Succession—

An Artist Who Pioneered New Artistic Expression by Integrating Performance Art and New Media, Remaining at the Forefront of Contemporary Art for 50 Years

Ms. Jonas created a new artistic form by integrating performance art and video art, and has evolved her original medium at the forefront of contemporary art continuously. Creating labyrinth-like works that lead audiences to diverse interpretations, she hands down the legacy of 1960s avant-garde art by developing it into a postmodern framework, profoundly impacting artists of later generations.

After studying art history and sculpture, in the late 1960s Ms. Jonas built relationships with many artists in her native New York. After participating in workshops by Trisha Brown and Lucinda Childs, who later became mythic figures in postmodern dance, Ms. Jonas was inspired to create her own original works based on body. From the 1970s onward, her works have featured a nonlinear structure without stories, with clear focus put on body and process, as well as diverse elements. Her remarkable long-term achievements also include her contributions in handing down the greatest legacy of 1960s avant-garde art represented by John Cage to future generations by developing it into a framework of postmodern art based on additive, diverse values.

Her Vertical Roll(1972), highly regarded as an archetype in the history of video art, integrated an actual performance with its real-time video screened on a TV monitor onstage. This work featured a revolutionary structure of coexistence of a live performance and its represented image, with a discrepancy in time and space between the audience’s viewpoints and camera angles, as well as the effect of electrical delay within the system. Since its release, the work has been studied and referred to by many artists. The masterpiece Reanimation(2010/2012/2013) in recent years, made with multiple layers of an endless series of diverse elements, is a labyrinth-like work filled with the nature and mythology of Iceland, along with drawings, sounds, and segments of her own earlier art. Ms. Jonas’ works contain a very contemporary narrative structure that encourages audiences to decode the works in their own original ways and achieve a wide variety of interpretations, including misinterpretations, rather than forcing them into a single prepared interpretation.

Since 1998 Ms. Jonas has also taught at the Massachusetts Institute of Technology, winning respect as an educator of character, and has had an immeasurable impact on artists over subsequent generations.

For these reasons, the Inamori Foundation is pleased to present the 2018 Kyoto Prize in Arts and Philosophy to Ms. Joan Jonas.