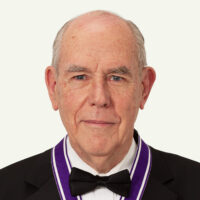 “Pioneering Achievements in the Development of Computer Graphics and Interactive Interfaces”

Dr. Sutherland has been responsible for many pioneering advances and fundamental contributions to the computer graphics technology used for information presentation, as well as the interactive interfaces that allow people to utilize computers without the need for programming.

Dr. Ivan Edward Sutherland has been responsible for many pioneering advances in and fundamental contributions to the computer graphics technology used for information presentation, as well as the interactive interfaces that allow people to utilize computers without the need for programming.

Computer graphics now have numerous applications, ranging from films, games and other forms of entertainment to educational materials, scientific and technological simulations, and design aids for industrial designers. Most computer graphics in use today can trace their origins back to “Sketchpad,” which was developed by Dr. Sutherland in 1963. Allowing the user to directly manipulate figures on a screen through a pointing device, its interactive interface was years ahead of its time. Sketchpad was capable of automatically generating accurate drawings from rough sketches by depicting the component elements of objects and their interrelationships. Today’s computer-aided design (CAD) system is a highly-influential descendent of this innovative program.

Dr. Sutherland has designed many of the fundamental algorithms now used in computer graphics, such as the algorithm that determines which edges and faces of objects to display on the limited space available on a screen. He also created “The Sword of Damocles,” the world’s first head-mounted 3D display system, thus opening up the new field of virtual reality.

In addition to his research at universities, Dr. Sutherland has been actively involved in product development at various private enterprises. In 1968, he co-founded the Evans and Sutherland Computer Corporation with his colleague at the University of Utah, which developed computer graphics workstations such as the ESV series, among others. Dr. Sutherland’s research group has also produced many talented individuals, such as the founders of Silicon Graphics Inc., Pixar Animation Studios, and Adobe Systems Inc., to name but a few.

Dr. Sutherland who is considered the father of computer graphics for these achievements has made significant contributions to the creation of the world enabling interactive use of computers.

For these reasons, the Inamori Foundation is pleased to present the 2012 Kyoto Prize in Advanced Technology to Dr. Ivan Edward Sutherland.