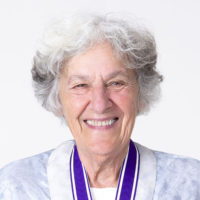 Did You Really Know to Whom You Were Giving This Prize?

Mrs. Mnouchkine, the founder and director of the Théâtre du Soleil, has been continuously producing masterpieces with historical and political themes. Referring to traditional performances of both the East and the West, she has been innovating theatrical expressions through her collaborative creations based on the methodology of her unique theatrical organization which eschews hierarchical order.

Mrs. Ariane Mnouchkine has led the Théâtre du Soleil, a theater company she founded in 1964, for over half a century, and has continuously produced internationally acclaimed masterpieces. At the root of her superb talent lies a strong belief that theater is a form of art that should be collaboratively perceived, created, and enjoyed. She has gathered diverse talents and fostered their high mentality and rampant creativity by exploring and developing their latent skills and imaginations.
While producing for the stage, Mrs. Mnouchkine first inquired what theater is or should be and reconsidered its basic principles. This resulted in her original, hierarchy-free theatrical organization with its unique methodology for stage creation. She also considered the audience to be an important member of the “creators” indispensable to theater and attempted to build strong relationships between performer, director, and audience. Since the Théâtre du Soleil started its activities in the Cartoucherie in the outskirts of Paris, its performances have been appreciated as being like festive topos where all kinds of people encountered one another. It could be said that the Théâtre du Soleil embodies the ideal of “public theater.”
In order to keep her audiences emotionally engaged, Mrs. Mnouchkine pursued a theatrical method that emphasized physicality by referring to traditional performances such as circus, commedia dell’arte, Japanese Noh, Kabuki, Bunraku, and Indian Kathakali. She reconstructed them using modern sensibilities and explored a method of utilizing actors’ improvisation techniques, which culminated in her Tambours sur la digue (Drums on the Dam) (1999) inspired by Bunraku. In this work, she attempted to create a comprehensive art form that blended theater with various other genres such as dance, music, and literature. Among experimental productions within the field of contemporary theater, her achievements have been remarkable.
In the early 1980s, Mrs. Mnouchkine produced a cycle of three Shakespeare plays starting with Richard II (1981) and demonstrated her deep insight and superb directorial skills in her approach to classical plays. As in her prior works like 1789, la révolution doit sʼarrêter à la perfection du bonheur (1789 or The Revolution Must Only Stop at the Perfection of Happiness) (1970), she tried to shed new light on the chaotic darkness that plagued the modern age, by taking a novel view of her contemporaries’ own history along with them. She preserved a reasonable amount of entertainment value while also strongly warning against contemporary historical and political developments. For example, she examined Cambodian genocide through the epic, LʼHistoire terrible mais inachevée de Norodom Sihanouk, roi du Cambodge (The Terrible but Unﬁnished Story of Norodom Sihanouk, King of Cambodia) (1985) written by Hélène Cixous, and depicted the hardships of refugees through their numerous testimonies in Le Dernier Caravansérail (The Last Caravanserai) (2003). Mrs. Mnouchkine’s innovations to theatrical expression have been globally inﬂuential.
For these reasons, the Inamori Foundation is pleased to present the 2019 Kyoto Prize in Arts and Philosophy to Mrs. Ariane Mnouchkine.

1939
Born in Boulogne-Billancourt, France
late 1950s
Joined the Oxford University Dramatic Society and the Experimental Theatrical Club
1959
Established the Association Théâtrale des Étudiants de Paris when studying at the Sorbonne
1964
Founded the Théâtre du Soleil
1970
The Théâtre du Soleil moved into the Cartoucherie of Vincennes
1984
Started the collaboration with Hélène Cixous
2005
Held a workshop and helped to create the Théâtre Aftaab in Kabul