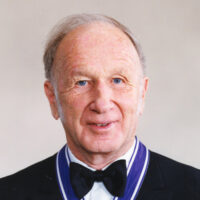 From Weather Forecasting to Chaos

A meteorologist who established the theoretical basis of weather and climate predictability, as well as the basis for computer-aided atmospheric physics and meteorology. He made his boldest scientific achievement in discovering “deterministic chaos,” a principle which has profoundly influenced a wide range of basic sciences and brought about one of the most dramatic changes in mankind’s view of nature since Sir Isaac Newton.