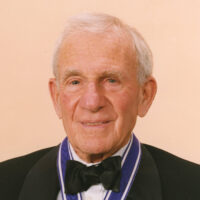 The Luck of Walter Munk

Frontier of the Ocean Research

During a research career that has spanned more than a half century, Dr. Munk has made fundamental contributions to understanding various ocean waves and tides and the mechanism of oceanic circulation. He was also the first to shed light upon the influence of the atmospheric and oceanic motions on the rotation of the earth, bringing a new development of studies in this field. Through these achievements, he has enormously influenced and promoted the development of earth science, especially oceanography, in the latter half of the 20th century.

Dr. Munk has made outstanding front running researches in numerous fields of oceanography for more than half a century and contributed extensively to the development of ocean science by continuously exerting enormous influence on the area.

Together with Dr. Sverdrup, Dr. Munk developed for the first time in the world the wave prediction theory that predicts changes in statistically representative values of wave periods and heights, through his pioneering research on the mechanisms of wave generation and development. This theory became the base for the subsequent development of wave prediction, and it is still vital in today’s wave forecasting. Through measurements of sunlight scattered by ripples on the ocean surface, Dr. Munk determined the relationship between the properties of waves and sea winds, and established the foundation for today’s satellite-based electronic remote sensing of sea winds.

Furthermore, Dr. Munk developed the theory of ocean currents to show that the Kuroshio and other major ocean currents are driven by winds blowing over the ocean surface and affected by the coastal friction brought through ocean eddies as well as the effect of the earth’s rotation. He neatly explained actual ocean current distribution, from subarctic to equatorial currents, based on observed wind distribution. The well-known term “gyre” was first introduced by Dr. Munk. He also shed light on the mechanism determining strong currents in the western boundary layers of the oceans which is now known as “Munk layer”. These are examples of his work which led to the creation of the framework for present-day theories on wind-driven ocean circulation.

Later on he investigated dynamical properties of internal gravity waves in the ocean and discovered a space-time spectral form having universal applicability. This finding gave strong impacts on researchers and discussion is still going on concerning the origin of the spectral form.

Dr. Munk’s research has also extended to geophysics, or physics of the solid earth. He made the first proposal for the sampling of materials from the earth’s mantle by means of ocean crust drilling, which led to the MOHOLE project, and further to a range of international projects such as the current Ocean Drilling Program. These movements encouraged new developments in studies on geophysics and the history of the earth. Dr. Munk was also the first to demonstrate that atmospheric and ocean movements cause irregularities in the earth’s rotation, a discovery that opened to a new era of research on this issue.The Rotation of the earth, which he co-authored with Dr. MacDonald, has become a “compulsory reading” for researchers working in the field.

In recent years, he has been advocating “acoustic ocean tomography” using sound waves transmitted underwater as a means of ocean measurement, and he is enthusiastically working towards development of this method.

As presented above, Dr. Munk has contributed to the development of earth science and of oceanography, in particular by his outstanding achievements. He has constantly pioneered new frontiers in global-scale ocean research by introducing innovative ideas, while training many young researchers to develop and realize these ideas. For these reasons, the Inamori Foundation is pleased to bestow upon Dr. Munk the 1999 Kyoto Prize in Basic Sciences.