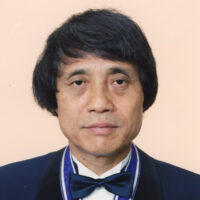 Thinking about our Environment in the 21st Century

Architecture in the 21st Century

Using the medium of unfinished reinforced concrete, Professor Ando has developed a unique mode of architectural expression infused with a sense of nature. As one of Japan’s leading architects, he has pushed the possibilities of modern architecture and continues to expand the field’s possibilities on a global scale.

Using the medium of unfinished reinforced concrete, Professor Tadao Ando has developed a unique mode of architectural expression infused with a sense of nature. As one of Japan’s leading architects, he has pushed the envelope of modern architecture and continues to expand the field’s possibilities on a global scale. Professor Ando is a self-taught architect born in Osaka in 1941.After establishing the firm Tadao Ando Architect and Associates in 1969, he garnered the attention of Japanese architectural circles when his Row House at Sumiyoshi (1976) was awarded the Architectural Institute of Japan’s Annual Prize in 1979. The Row House project provides a provocative reminder of what it means to live in a dwelling through the influence of typical Osaka working-class homes. Rendering characteristics of traditional row houses into a contemporary idiom, the structure embodies Professor Ando’s desire to incorporate the natural world into urban residences.

Works such as TIME’S (1984, Kyoto), Chapel on Mt. Rokko(1986, Kobe), Church of the Light (1989, Osaka), Naoshima Contemporary Art Museum (1992, Naoshima), Chikatsu-Asuka Historical Museum (1994, Osaka), and many others have been equally stimulating to modern architecture at large. Expressed through unadorned steel-reinforced concrete cast with metal shuttering, his structures are both straightforward and lyrical and have been praised by architects worldwide for their successful incorporation of Japanese architectural elements into a contemporary context. Accordingly, Professor Ando’s own sphere of activity has extended to a global scale. Many of his designs strive to create an interplay between modern architecture and history, as in his Benetton Communication Research Centre (2000, Treviso, Italy) and International Library of Children’s Literature (2002, Tokyo), and all of them are imbued with a continuity of concept and an excellence of artistry that have made them the object of international recognition.

Professor Ando’s original style has grown out of his aesthetic quest to relate life and architecture within a modernist context. At the same time, he has passionately pursued the fusion of his works with nature, occasionally mediating this relationship by placing structures underground. Despite the inherent foreignness of buildings in the natural world, his creations successfully integrate into their surroundings while maintaining a sense of strength. It is this synchronism of naturalistic influences from traditional Japanese architecture with modernist qualities that distinguishes Professor Ando’s designs. His is an architecture born out of the interaction of nature, history, and culture.

In addition to artistic excellence, Professor Ando has shown a deep awareness of the broad social implications of his metier through active involvement in social causes. After the Great Hanshin-Awaji Earthquake of 1995, he took a leading role in providing support to the victims by serving as chairman of a ten-year committee formed by artists and other intellectuals dedicated to the reconstruction effort. With characteristic and straightforward resolve, he proselytized the social obligation of architects to contribute to urban recovery. As part of this endeavor, he continues his work with the Setouchi Olive Foundation, dedicated to restoring environmental decimation caused by industrial waste on Teshima Island.

Professor Ando’s original oeuvre has stimulated and expanded the potential of modernist architecture. His social service efforts serve as a model for the ways in which architects can positively contribute to the world in which we live. For these reasons, the Inamori Foundation is proud to present the 2002 Kyoto Prize in Arts and Philosophy to Professor Tadao Ando.