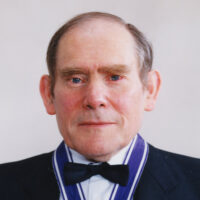 Pioneering Contribution to Molecular Biology through Demonstration of Messenger RNA and Establishment of C. Elegans as an Experimental System for Developmental Biology

A molecular biologist who made a pioneering contribution to the development of molecular biology. During the early days of molecular biology, he contributed greatly to the establishment of the genetic code including the discovery of termination codons, and also proved elegantly the existence of messenger RNA. These studies, together with numerous other works by him, led to the establishment of modern gene technology. He also developed an experimental system for a nematode, and demonstrated that the timing and location of cell division is completely programmed genetically.

Starting around 1960, during the formative years of molecular biology as a science, Dr. Brenner actively carried out extensive studies in various research fields. He is especially noted for proving the existence of messenger RNA, which is the intermediate substance in the transmission process of genetic information from DNA to the protein structure. Furthermore, he did research on the relationship between amino acids and genetic codes, and proposed that a single amino acid’s genetic information is transcribed by three nucleotides (i.e. a triplet) of DNA or RNA. He also demonstrated that the triplet combination uracil, adenine, and guanine, is a code, the so-called nonsense codon, to signify the end of a translation process. His name is known worldwide because his research constituted the most important foundation of current molecular biology and gene technology.

Since then, as a model for investigating genetic information and its development and differentiation in multicellular organisms, Dr. Brenner has developed a simple experimental system for C. elegans, which is composed of very few structural cells and which is easy to use for genetic and biological analysis. Dr. Brenner played a guiding role in these research areas. Recently, he demonstrated that the timing and location of cell division is completely determined by genetics. He has also succeeded in cloning most portions of DNA for C. elegans.

Stimulated by Dr. Brenner’s pioneering studies, many laboratories worldwide are currently working together to develop new active studies in the fields of anatomy, heredity, genetics, and behavior for C. elegans.

Through his great knowledge and incessant efforts, Dr. Brenner created a new field of research in molecular biology. His contributions to the establishment of today’s gene technology and the important role he played as the world leader in this technology are so significant that Dr. Brenner is a most suitable laureate for the 1990 Kyoto Prize in Advanced Technology.