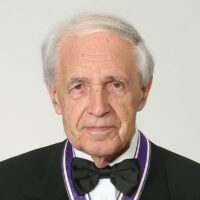 A Musician Who Has Consistently Set Trends through His Composition, Conducting, Writing, and Organizational Operation

Mr. Boulez, as a composer, has greatly contributed to the contemporary music with his innovative works by advancing the musical style of serialism and then by utilizing electroacoustic technique. In addition, he has acted in a broader field of music as a conductor, a writer and an organizer. He has demonstrated a high degree of stimulating creativity and influence in each aspect and led the world of Western music after World War II.

Mr. Pierre Boulez is among the most notable musicians to have led the world of Western music after World War II. A man of versatile talent, he has demonstrated a high degree of stimulating creativity and influence in everything he has attempted, including composition, conducting, writing, and organizational operation, thereby helping to change the contemporary scene over several decades.

Born in France in 1925, Mr. Boulez contributed to both the theoretical and practical advancement of the then emerging musical style of serialism, accomplishing major achievements as the “greatest composer of serial music”. His musical works from the 1950s, including Le marteau sans maître, not only further developed the methodologies of Olivier Messiaen and René Leibowitz, under whom he had pursued musical studies, but also created a strong link among some of the major musical trends forged in the first half of the 20th century by the likes of Claude Debussy, Anton Webern, and Igor Stravinsky.

In the 1960s, he suggested future musical directions, which he then followed up with a series of works including Pli selon pli. These works adopted the concept of “aleatory.” During this period, he also published stimulating and thought-provoking literary works. As a conductor, he founded the Domaine Musical and developed his repertoire out of 20th-century music with precise and lucid performance. From the late 1960s, his conducting repertoire began expanding to include classical music and romantic music. He also conducted the operatic music of Wagner at the Bayreuth Festival and the world premiere of the three-act version of Bergfs Lulu at the Paris Opera. On these occasions he delivered revolutionary performances and his interpretations of these works set models for contemporary artists to follow.

In the 1970s, Mr. Boulez assumed directorship of the Institute for Research and Coordination Acoustic/Music (IRCAM) at the Centre Pompidou in Paris, where he devoted himself to the development of both software and hardware for computer-based real-time sound processing; thus playing a pioneering role in the development of computer music. He caused a sensation among creative circles when he himself made full use of this technique to render his major workRépons. Meanwhile, he also founded and directed the Ensemble InterContemporain chamber orchestra. At the recommendation of Michel Foucault, he became a professor at Collège de France, exchanging his views with leading philosophers in France.

Today, in his mid-eighties, Mr. Boulez continues to actively record and perform music as a conductor of leading orchestras around the world. As part of his commitment to the future of musical culture, he also provides lessons on contemporary music for younger generations of musicians at the annual Lucerne Festival.

For these reasons, the Inamori Foundation is pleased to present the 2009 Kyoto Prize in Arts and Philosophy to Mr. Pierre Boulez.