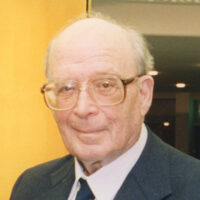 On the Beginnings of Indian Philosophy

Some Problems in Vedic Studies

Through his rigorous approach to philosophical studies, he added immensely to our knowledge of Vedic and other classical Indian literature and provided a solid foundation to the study of the history of Indian thought. He has also trained many outstanding scholars and made a profound contribution to the academic world.

＊This field then was Field of Philosophy, History of Ideas (Ancient Indian and Greek).

Ancient Indian thought has, in the form of Buddhism, been familiar to the Japanese since the earliest historical times. But its deepest and most venerable roots can be traced back to that great body of classical literature known as the Vedas.

Dr. Thieme has established a firm foundation for the elucidation of the Vedic texts, and has produced from among his students many outstanding scholars in fields such as Vedic studies, Indian philosophy, Sanskrit grammar, and Indo-Aryan Philology. These students have continued Dr. Thieme’s work in many nations far beyond the borders of his native Germany.

The Vedic literature which has formed the principle object of Dr. Thieme’s enquiry is important not merely from the standpoint of ideological research, but because it comprises Hinduism, Buddhism, and various other elements making up the rich tradition of Indian thought. The Vedas, the oldest of all Sanskrit literature, rank in importance with the ancient Greek classics as vital source materials for comparative linguistic studies in the Indo-European languages.

Dr. Thieme, building on his work in the Western classics and Indo-European comparative linguistics, has opened new vistas in the philological and interpretative study of Vedic literature.

Dr. Thieme’s method employs the “Wortkunde,” a German expression indicating the study of word meaning. This method involves collecting terms associated with important ideological and literary concepts from the entire range of Vedic literature, arranging them, and analyzing them according to context. This precise investigative technique enables the fundamental meanings of concepts to be clarified, and their subsequent etymological development to be traced.

Using this method Dr. Thieme has clarified the meanings of numerous important concepts, including “brahman,” the supreme principle of the universe and one of the fundamental axioms of Indian philosophy and religion, and “arya,” the name adopted by the various peoples who rose from the original Vedic culture.

Ancient Indian literature, with the Vedas at its peak, stands with the classic writings of Greece and China as part of the priceless spiritual heritage of humankind. In modern civilization we have come to rely on fossil fuels such as coal and oil for many of our material needs, but the ancient classics provide an invaluable source of “fossil fuel” to meet our spiritual needs. Correctly understood and applied, they have an enormous amount to contribute to our inner lives.

Dr. Paul Thieme’s contribution in providing a firm direction for the study of the ancient Indian classics is fully as important as any advance made in the more eye-catching fields of science and technology. His work is a priceless gift to the future of humankind.