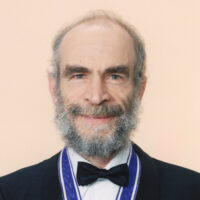 Spaces Beyond the Space

Professor Gromov’s original insights integrate a variety of fields – including geometry, algebra, and analysis – and have had a substantial impact on all the mathematical sciences. Through the application of innovative ideas and radical nontraditional mathematical methods, he has made major breakthroughs that solve numerous complicated problems in modern geometry.

＊This field then was Field of Mathematical Sciences.

Professor Mikhael L. Gromov’s original insights integrate a variety of fields, including geometry, algebra, and analysis, and have had a substantial impact on all the mathematical sciences.Through the application of innovative ideas and radical nontraditional mathematical methods, he has made major breakthroughs that solve numerous complicated problems in modern geometry.

Professor Gromov is one of the greatest geometers of our day,following in the footsteps of Georg Friedrich Bernard Riemann and Jules Henri Poincare in the nineteenth century and Elie Joseph Cartan and Shiing-shen Chern in the twentieth century. For many years after Riemann and Karl Friedrich Gauss formulated the notion of spaces, one of the principal problems in geometry had been to find the relationship between a space’s global structure and its local properties.

Professor Gromov’s early research included studies of isometric imbedding and regular homotopy theory in the 1960s and early 1970s and investigations of Riemannian spaces in the late 1970s and 1980s, the latter from which he established particularly revolutionary concepts. Geometers before him had studied the properties of individual manifolds, but Professor Gromov introduced the idea of studying a huge family of spaces containing manifolds as elements. He then proposed extracting the properties of manifolds conversely from the family of spaces using a radical new metric structure. With this dramatically innovative method, he has been able to solve a large number of problems-especially those such as curvature and topology, which concern the relationship between local and global properties-and has made unexpected breakthroughs in a field believed already to have reached maturity.

The influence of these findings has been felt in many different directions. For example, the pinching problem had traditionally been treated only in spaces of positive curvature, such as spheres, but Professor Gromov obtained significant results by expanding his study to the spaces of negative curvature. By considering the topological limits of the manifolds within a space, he also encouraged the study of Alexandrov spaces, which appear in the boundaries. Discrete groups had not been well understood up to that point. Professor Gromov, however, obtained new results in this field through an application of the idea of defining a metric structure for families of spaces to the study of discrete groups. Furthermore, he proposed the concept of hyperbolic groups, which make up the majority of discrete groups, thereby contributing significantly to the development of combinatorial group theory and topology. He also discovered Gromov-Witten invariants, entirely new topological invariants for symplectic manifolds.

Professor Gromov’s ideas and techniques continue to have broad applications in geometry and a variety of fields, including analysis, algebra, and his current research in bioinformatics. Professor Gromov’s achievements, though too numerous to list, have had an immeasurable impact across all fields of mathematics, and each of them deserves our greatest esteem. It is with pleasure that the Inamori Foundation presents the 2002 Kyoto Prize in Basic Sciences to Professor Mikhael Leonidovich Gromov.