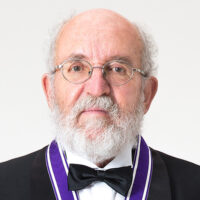 Formations Mechanisms of Planetary Systems and the Quest for Earth-Twins

Dr. Mayor answered a fundamental age-old question of astronomy regarding the existence of exoplanets by discovering the first one orbiting a Sun–like star. This achievement was facilitated by his continuous refinement and improvement of observation technology, including the development of a series of spectrographs. His continuing contributions have revealed the diversity of exoplanets, opening an entirely new field of research.

For many years, people have wondered whether planets orbiting Sun-like stars exist outside of our own solar system. Enormous advances have been made in recent years with regard to this fundamental question. The discovery of the first such exoplanet by Dr. Michel Mayor served as the catalyst for these advances, opening up a new intellectual horizon. His observational discovery, which represented a clear answer to this question, deserves special recognition in the history of astronomy in the past 20 years. It not only led to the subsequent discovery of many other exoplanets, but also opened prospects for future experimental studies in planetary science and astrobiology.

Dr. Mayor had originally conducted an extremely intensive spectroscopic exploration for small-mass companions of solar-type stars by developing a series of high-dispersion spectrographs. In the course of this exploration, in 1995, together with Dr. Didier Queloz, a graduate student at that time, he discovered the planet 51 Pegasi b, which orbits the star 51 Pegasi. Surprisingly, its orbital period is only 4.2 days despite the fact that its mass is comparable to that of Jupiter. Its properties were completely unexpected from our solar system’s structure and planetary formation theory. Their discovery has resulted in the advent of an exciting new research field: “exoplanets.” As a result of constant improvements to his high-dispersion spectrographs, Dr. Mayor’s work has significantly contributed to the discovery of “super-Earth” planets with mass several times greater than that of Earth.

Other observations that followed their discovery led to the discovery of many similar giant planets with short orbital periods, which have been dubbed “hot Jupiters.” Subsequent discoveries have included planets with large and quite eccentric elliptical orbits, unlike those in our own solar system with nearly circular orbits. This has revealed the incredible diversity of exoplanets, some of which are remarkably different from those of our solar system. To date, many more exoplanets have been discovered using a variety of observation techniques as well as the radial velocity method employed by Dr. Mayor. Such rapid progress has enabled us to conduct statistical research of exoplanets. In the future, it is expected to bring about an unbroken succession of new scientific milestones such as discovery of a “second Earth,” a habitable planet with the potential to support life due to the presence of liquid water and indications of life through atmospheric observation.

Research on exoplanets ranks among the most pivotal topics of 21st century astronomy, planetary science and astrobiology; and, the steady expansion of this new research frontier that Dr. Mayor opened is unequivocal.

For these reasons, the Inamori Foundation is pleased to present the 2015 Kyoto Prize in Basic Sciences to Dr. Michel Mayor.