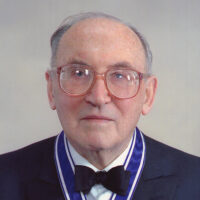 A Computer Engineer Looks Back

A computer engineer who has made an enormous contribution to the research and development of computers for practical use. He was responsible for the development of EDSAC, the first stored program computer to go into service, the prototype of the modern computer, and has conducted a great deal of highly original research into computer architecture necessary to realize high-performance computers.

Dr. Maurice Vincent Wilkes is an eminent computer engineer who first developed the “stored-program computer,” the prototype of most modern computers, as well as devising many of the principal arithmetic control procedures adopted in contemporary computers. He has thereby made major contributions to the development and practical implementation of computers.

Dr. Wilkes focused his attention upon the proposals of the group headed by Dr. John von Neumann, and devised the ultrasonic delay line storage unit, stored program control mechanism, and other apparatus necessary for the realization of these proposals; and in 1949 he led the entire world by developing a stored program computer, the EDSAC, at the practical level. This program technology was exploited in the development of the first business computer, known as the LEO (Lyons Electronic Office), in 1951. Furthermore, these technological advances made possible a great number of notable achievements such as the basic programming methodology, the subroutine concept, and methods of program loading, and numerical analysis, thereby demonstrating the epochal capabilities inherent in stored program computers.

In addition, Dr. Wilkes has conducted a great quantity of original research on the procedures and devices (architecture) necessary for the realization of high-performance computers, including microprogramming and multiprogram processing methods, prototypes of operating systems, time-sharing systems, local area networks (LAN), memory protection devices, and numerous other valuable techniques. In particular, his proposals concerning microprogramming methods were indispensable for the realization of very-large-scale integrated (VLSI) high-performance computers, as well as providing effective means for imparting problem-adaptive capabilities to computers. These contributed to the realization of a new computer paradigm and have been evaluated extremely highly. This multitude of important research results has been presented and announced in a total of seven books and over 130 research papers.

This record of brilliant research achievements duly attests to the preeminent qualifications of Dr. Maurice Vincent Wilkes as the laureate of the 1992 Kyoto Prize for Advanced Technology.