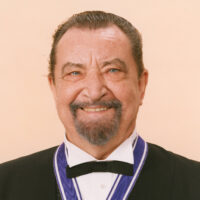 Mr. Béjart, one of the greatest choreographers of the 20th century, has elevated ballet, a genre of performing arts, to the level of an art form that can express thought. He revived at a stroke the primitive power that dance originally had, but that had long been lost. Because of these achievements, he has profoundly influenced not only the world of dance, but also other art forms, literature, and even philosophy.

Mr. Maurice Béjart has not only elevated ballet, a performing art, to an art form that expresses thought as well, but he has also revived at a stroke the primitive power dance originally possessed. He has thus profoundly influenced the world of dance and, at the same time, other art forms, literature, and even philosophy.

In 1955, Mr. Béjart’s choreography of Symphonie pour un Homme Seul(Symphony for a Lonely Man), a piece steeped in existentialism, convincingly launched his career as a choreographer. He then created a worldwide sensation in 1959 with his Le Sacre du Printemps (The Rite of Spring). Departing considerably from the original tale of a virgin sacrificed to the gods of spring, Mr. Béjart emphasized the power of sex and reproduction through a corps de ballet comprising seemingly naked men and women clad in leotards — truly innovative choreography that shook his audience to the core. At the same time, his choreography revealed the power that was inherent in primitive dance. Mr. Béjart, abandoning symmetry to tap the primeval power of rings and circles, overcame the limitations of the conventional dance stage and dramatically altered the course of mainstream classic ballet throughout the world. In the years since, Mr. Béjart’s Le Sacre du Printemps has continued to exert an immeasurable impact on dance everywhere.

Mr. Béjart subsequently produced IXe Symphonie (Ninth Symphony), Boléro and numerous other works, drawing in his audience by demonstrating the primeval power of dance through a direct appeal to all five senses. One of these masterpieces, Boléro, was famously included in the Claude Lelouche film Les Uns et les Autres, creating a dramatic climactic scene, and Mr. Béjart’s works have undeniably succeeded in bringing dance closer to the general public. He has also helped to develop succeeding generations of artists by establishing the Mudra School, an institution dedicated to the performing arts, a great many of whose graduates are active today as dancers and choreographers.

Mr. Béjart made the dance performance an occasion for contemplation and the stage a space for thought. Deep in the heart of his approach is love, and his objective is to link people together across racial and ethnic barriers. A motivating force behind the surging new spirit which seeks through dance to think more deeply and feel more strongly about the human condition, Mr. Béjart is leading dance into the 21st century. For these reasons, the Inamori Foundation is pleased to bestow upon Mr. Béjart the 1999 Kyoto Prize in Creative Arts and Moral Sciences.

1927
Born in Marseilles, France
1941
Starts lessons in ballet at 14 years old
1945
Makes debut his first choreography at Marseilles
1954
Founds Ballet de l' Etoile in Paris
1955
Choreographs "Symphonie pour un Homme seul" and starts as a choreographer
1959
Creates "Le Sacre du Printemps (The Rite of Spring)" and establishes his reputation as a choreographer of global fame
1960
Founds Ballet du XXe Siecle in Brussels
1986
Stages "The Kabuki", a composition based on "Kanadehon Chusingura" in Tokyo
1987
Moves his base to Laussanne in Switzerland, and founds Bejart Ballet