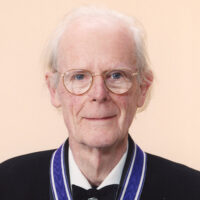 The Marriage of Mathematics and Biology

Professor Maynard Smith has made a groundbreaking contribution to the establishment of a unified understanding of fundamental issues in evolutionary biology, including social activities of organisms and the essence of the evolution of sexual reproduction, by proposing the idea of the evolutionarily stable strategy (ESS). In doing so, he has not only immensely contributed to the development of biological sciences,but he has also had major impact on other disciplines including economics and politics.

Professor John Maynard Smith has made a groundbreaking contribution to the establishment of a unified understanding of fundamental issues in evolutionary biology, including the social behavior of organisms and the problems of sex and sex ratio, by proposing the idea of the Evolutionarily Stable Strategy (ESS).

According to the basic concept of modern biology, the behaviors of individual organisms and their efforts to reproduce are not directed towards the maintenance of their species, but are instead quite selfish and competitive, and are actually attempts to maximize their individual Darwinian fitness. i.e. to produce as many offspring with their own genes as possible. Altruistic and competitive behaviors appear to contradict this concept, but such interactions between related individuals have been satisfactorily explained by the concept of kin selection proposed by Professor W. D. Hamilton (a 1993 Kyoto Prize Laureate).

However, altruistic or cooperative behavior also often occurs between non-kin individuals; for example, when adult male animals fight for food or territory, they seldom fight to the death. Why? This question also very much pertains to human morality and peace, but it had hitherto eluded theoretical explanation.

Based on an assumption that animals are playing games for existence with each other, Professor Maynard Smith introduced game theory, and clearly demonstrated the reason why animals do not kill their competitors when they fight. He used the analogy of a Dove strategy versus a Hawk strategy: the Dove retreats at once if the opponent escalates the contest, whereas the Hawk always escalates the contest and continues until injured or until the opponent retreats. If all individuals are using a Dove strategy, a Dove strategy is more likely to increase individual fitness. However, individuals adopting the Dove strategy are always defeated by invading Hawk strategists, and so the population becomes unstable. Professor Maynard Smith proposed that there should be a strategy, termed an Evolutionarily Stable Strategy (ESS), which is more likely to succeed and persist in a population. Such a strategy shown by the majority of individuals in a population can effectively exclude invasion by any other strategy. He subsequently applied game theory to a wide variety of examples, to demonstrate how certain behaviors can be an ESS. For example, in the case of a fight, one ESS is a conditional strategy, which he termed a bourgeois strategy, saying `Play Hawk if owner of territory, and play Dove if intruder.’

Based on the idea of ESS, Professor Maynard Smith has used a mathematical approach to successfully and elegantly explain the essential aspects of a large number of unsolved questions in evolutionary biology, behavioral ecology and population genetics. As such, the theory of ESS is a key to a more unified understanding of the diverse field of biology. Furthermore, in addition to dramatic advances in the field of evolutionary biology, the ESS idea has also significantly influenced such diverse fields as economics, business sciences, and politics.

For these reasons, the Inamori Foundation is pleased to bestow upon Professor Maynard Smith the 2001 Kyoto Prize in Basic Sciences.