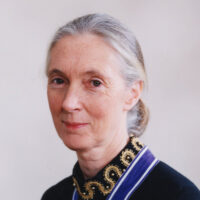 The Chimpanzee—a Living Bridge Between Man and Beast

Humanity's Bridge to Our Animal Heritage

Long-Term Study of Behavior, Sociology, and Ecology of Chimpanzees in the Wild

A primatologist who not only impacted accepted views of humanity and drastically changed the evolutionary theory of man, but also influenced the development of theories in behavioral science. Through thirty years of continuous observation of free-living chimpanzees at the Gombe National Park on the northeast coast of Lake Tanganyika, she elucidated their behavior, society, and ecology. She thereby demonstrated that certain behavior and abilities, which were considered intrinsic only to human beings, were actually present in the society of chimpanzees as well.

*This field then was Field of Biological Sciences (Behavior, Ecology and Environment).

Dr. Jane Goodall began her research of free-living chimpanzees in 1960 at the Gombe National Park on the northeast coast of Lake Tanganyika, Africa, and through 30 years of continuous observations, she revealed their behavior, society, and ecology. She has made many startling discoveries including the utilization and production of tools, hunting and meat eating, begging and distribution of food, various social adjustment behaviors, coordination among individuals, infanticide, and warfare including massacre among groups. She thereby demonstrated that certain behavior and abilities, which were considered intrinsic only to human beings, are actually present in the society of chimpanzees as well.

With these discoveries, she carefully and extensively traced the mother-child bond in natural surroundings, and as a result, arrived at many findings which comprise the essence of her work. Dr. Goodall demonstrated that the chimpanzees, which have a long life span, go through a process of complex socialization. Such spectacular results of research could be accomplished only by a true naturalist whose unique methodology would not be possible without life-long devotion to this work.

As it becomes even more important for mankind to reassess its nature from a scientific standpoint, Dr. Goodall’s research has provided a very important fresh starting point for the development of such research. Dr. Goodall’s research not only impacted accepted views of humanity and drastically changed the evolutionary theory of man, but it also influenced the development of theories in behavioral science.

Along with her research on chimpanzees, Dr. Goodall has also conducted remarkable research on the spotted hyena and the olive baboon. In addition, her efforts regarding environmental protection deserve high praise.

In natural science, theoretical bases are formulated after extensive observations and careful experimentation. Dr. Goodall’s achievements on the free-living chimpanzees were often conducted alone under difficult conditions for long periods of time. Through her efforts, she has provided one of natural science’s basic building blocks. Therefore, she is a most suitable laureate for the 1990 Kyoto Prize in Basic Sciences.