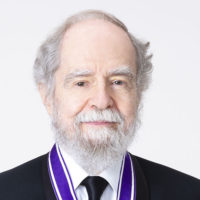 Wide-Field Sky Survey of the Universe: from the Past to the Future of Astronomy

Dr. Gunn led the Sloan Digital Sky Survey, which produced a three-dimensional digital cosmic map encompassing a broad region. He played a leading role in the project, including planning, instrument development, and data analysis, and contributed to the elucidation of the evolutionary history of the universe. He also published many pioneering astrophysical theories. Through these achievements, he has provided us a significant understanding of the universe.

Dr. James Gunn conceived and designed the Sloan Digital Sky Survey (SDSS) project (1), which produced a three-dimensional digital cosmic map. He realized the project successfully by developing the necessary innovative technologies for the observations and data analysis. On the basis of the enormous amount of precise data produced by the SDSS, Dr. Gunn made outstanding contributions to the elucidation of cosmic history and the properties of various celestial objects and to determining the parameters of the expanding universe with unprecedented accuracy.
Dr. Gunn led the design of the key hardware components of the SDSS, a 2.5-m wide-field telescope (2), an ultra-large mosaic CCD camera (3), and a multi-object spectrograph that acquires spectra of 640 celestial objects simultaneously (4). This project commenced in 1992 with seven U.S. institutions and a Japanese group, and regular observations began in April, 2000. As the data and research results were published, the number of participating institutions increased to 25. By 2009, 230 million celestial objects were cataloged, and the spectra of 930,000 galaxies, 120,000 quasars, and 460,000 stars were obtained (5). Through the publication of the SDSS astronomical catalog, containing an overwhelming amount of homogeneous information, numerous discoveries were made by many astronomers at institutions all over the world. Thus, the SDSS is now regarded as one of the most successful projects in the history of observational astronomy.
The three-dimensional cosmic map of galaxies made from the SDSS contributed to the elucidation of the evolutionary history of the large-scale structure of the universe (6, 7). The SDSS data also led to the discoveries of numerous distant quasars (8), gravitational lenses (9), and new populations of low-temperature brown dwarf star (10). The data on the large-scale galaxy distribution obtained by the SDSS were combined with the data on the temperature ﬂ uctuation in the cosmic microwave background radiation to reveal that the fraction of normal matter in the universe is less than 5%, whereas the rest of the universe is composed of dark matter (25%) and dark energy (70%) (11). Today, this fi nding has been established as the standard model of the universe.
Dr. Gunn not only led the SDSS, but earlier in his career also published an important idea that determines the degree of ionization of the early universe (12) as well as many other pioneering astrophysical theories (13). He has also made major contributions to the development of many other innovative astronomical instruments. As modern astronomical research has progressively become more specialized, Dr. Gunn is a rare astronomer who has produced outstanding achievements in theory, observation, and instrument development.
For these reasons, the Inamori Foundation is pleased to present the 2019 Kyoto Prize in Basic Sciences to Dr. James Gunn.