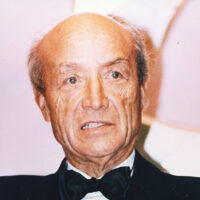 The Road I Have Walked

The Beauty of the East and West

One of the greatest masters of modern times, exerting great influence on many artists, his activities are not limited to the ordinary domain of sculpture, but spread throughout the fields of stage sets, industrial design, garden design, etc.

Isamu Noguchi is one of the most creative, productive, and active artists of the twentieth century. He has so far produced a great number of outstanding works of art. Regardless of his advanced age he is still opening up one new world after another, which deserves our admiration. This year he was chosen as the only American artist for the International Venice Biennale Exhibition, where he showed his inexhaustibly flourishing creativity.

Born of an American woman and a Japanese poet, Yonejiro Noguchi, he has merged the traditions of these two countries in his poetic sentiment, full of subtle nuance, and his formativeness, full of vigor. He is not only a great poet of forms but also a plastic artist whose handling of space is full of imagination, and a sophisticated designer of living environments. In his works of art we find a strong intent to establish order in space and delicate tenderness toward people, sometimes with a sense of humor.

When we confront his works of sculpture or when we stand in a garden of his design, their strength overwhelms us and gives us a rich feeling of serenity. He has visited Japan as well as other Asian and European countries, and continues to be very active in various countries around the world, enriching the legacy of humankind and exerting great influence on many artists. Isamu Noguchi is evidently a man worthy to be called one of the greatest masters of modern times.