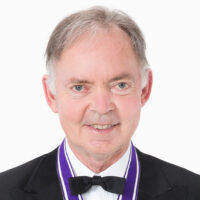 From Understanding Plant Life to Projecting Changes of Global Environments

Dr. Farquhar has developed process-based models of photosynthesis, enabling the prediction of the environmental responses of carbon dioxide exchange between vegetation and the atmosphere, as well as models for the fractionation of the stable isotopes of carbon and oxygen during photosynthesis and transpiration. Doing so, he has made major contributions to the advancement of environmental and climate change sciences.

Photosynthesis by plants provides the foundational support to all ecosystems on Earth. Functional understanding of photosynthesis is thus critically important for analyzing responses of agricultural production and ecosystem processes to environmental changes. Terrestrial plants control stomata in order to optimize the uptake of carbon dioxide (CO2) from the atmosphere while preventing excessive water loss via transpiration. Hence, the assimilation rate of CO2 cannot be considered separately from transpiration.
Dr. Graham Farquhar and colleagues developed a series of process models of photosynthesis based on the fact that the carbon assimilation catalyzed by Rubisco is a major rate-limiting step in photosynthesis. The model first published in 1980 enabled quantitative analyses of CO2 exchanges between plants and the atmosphere in relation to multiple environmental factors, and applied to a wide range of biological levels from cells and leaves, to forests. The model has been used in quantitative evaluations of how diverse vegetations, such as agricultural fields, grasslands, and forests respond to increases of atmospheric CO2 due to human activities, and how these responses are affected by water availability and temperature. Most importantly, it is incorporated in almost all of the existing models of the terrestrial biosphere carbon cycles, and as such, it is indispensable for climate change science.
Dr. Farquhar also developed process-based models for fractionation of stable isotopes of carbon and oxygen during photosynthesis and transpiration by terrestrial plants. These models have been used extensively in botany, agricultural science, environmental science, paleontology (tree ring analysis), and ecosystem ecology (isotopic analysis of the food chain). Dr. Farquhar continues to be actively engaged in pioneering research in botany and environmental science. As for his contribution to agricultural sciences, Dr. Farquhar assisted selections of drought-resistant varieties of wheat and peanut by utilizing his process-based models of photosynthesis, which led to the identification of key genes for efficient water use.
Dr. Farquhar has actively contributed to climate change science and development of science-based policies, for example as a member of the Intergovernmental Panel on Climate Change, and also as a scientific advisor and an Australian representative to the Kyoto Protocol negotiations.
In summary, for almost 40 years, Dr. Farquhar has contributed to the advancement of environmental science and climate change science. As climate change science becomes increasingly important, his process-based models of photosynthesis will continue to play a significant role at the global research fronts.
For these reasons, the Inamori Foundation is pleased to present the 2017 Kyoto Prize in Basic Sciences to Dr. Graham Farquhar.