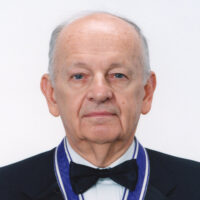 In electronic equipments, displays for graphics and characters are essential. Cathode-ray tubes (CRTs) have long been used as displays. However, they are not suitable for flat-type or portable displays. The possibility of liquid crystals for flat-panel displays was examined at the RCA laboratories in U. S. A., and there, Dr. Williams studied various properties of liquid crystals, such as their electro-optic behavior.

Dr. Heilmeier, who was working at the RCA laboratories at that time, became interested in one of these properties, namely that the internal electric fields in liquid crystals significantly depend on their controllable molecular orientation. Seized with a passion to utilize this property practically to display devices, Dr. Heilmeier joined the research group. In 1964, he discovered that an applied voltage changes the color of a dye-doped nematic liquid crystal. This discovery was a stepping stone to the development of liquid crystal displays. In a series of steps, he developed several approaches for the realization of these displays. Finally, he found that in certain classes of nematic liquid crystals the material itself turns from transparent to milky white with an applied electric field. This phenomenon is called dynamic scattering, and it made flat-panel displays possible. The displays using the dynamic scattering effect had simple structures, because the liquid crystal itself turns to milky white and scatters light. Furthermore, since the switching time of the effect was a few tens of milliseconds, even real-time displays were in view at that time. Dr. Heilmeier and his co-workers fabricated various prototype displays and implemented them in various equipments, and RCA showed these prototypes to the world at a press conference in 1968: the first liquid crystal displays. This announcement attracted great interest at the many research institutes and electronics companies, and produced intense development races. In succeeding years, important achievements such as the development of high-controllability twisted-nematic (TN) mode and more stable liquid crystal materials were made. Furthermore, manufacturing companies made an effort for the development and improvement of device structures and producing technology to commercialize the displays, and that led to today’s full-scale practical application of liquid crystal displays.

Liquid crystal displays are now used in an extremely wide range of electronic equipments from palm-sized mobile phones to large-size TV screens. Dr. Heilmeier’s pioneering contributions to the realization of liquid crystal displays triggered this recent revolutionary change in displays. Thus his achievements have had a major impact and will justly be remembered by posterity as milestones in the history of technical progress.

For these reasons, the Inamori Foundation is pleased to present the 2005 Kyoto Prize in Advanced Technology to Dr. George H. Heilmeier.