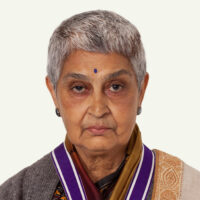 What Words Can Tell Us Through Translation: The Future of the Humanities

Professor Spivak has shifted a critical theory of “deconstruction” into political and social dimensions, and applied a sharp scalpel to intellectual colonialism which is being reproduced in our heavily globalized modern world. She exemplifies what intellectuals today should be, through her theoretical work for the humanities based on comparative literature and her devotion to multifaceted educational activities.

Professor Gayatri Chakravorty Spivak is an Indian intellectual who has applied a sharp critical scalpel to intellectual colonialism, which is being reproduced afresh in our heavily globalized modern world in the form of geopolitical configurations between “power” and “knowledge,” through which different regions, classes, ethnic groups, religions, generations, genders and other factors are all complexly intertwined. Professor Spivak has shifted a literary critical theory of “deconstruction” into contemporary political, economic and cultural dimensions and, while exerting an influence on historical studies, political science and feminism, has presented her own cultural and critical theory for the humanities.

Her best-known work, “Can the Subaltern Speak?” discusses the “subalterns”—those who are economically dispossessed, forcibly marginalized and rendered without agency by their social status. In this article, she listens carefully to the subaltern voice which has been historically muted, and she sounds a pungent warning against its newly-formed identity made in the process of representation by others and against the structure of oppression that arises therein. Epitomizing her concept, the approach of “unlearning”—undermining one’s own privileged position and learning in the face of the geopolitical situation of knowledge—has strongly influenced the development of postcolonialism which criticizes the politics, economy and culture, which were once supposed to surmount the framework of nation states, have instead come to function as a form of renewed colonialism. Against this emerging colonialism, she denies the closed imagination of nationalism, and values the transnational imagination that comes into play in the plurality of different cultures deeply rooted in languages. Alongside her intensive engagement in the study of different languages, she has been speaking for the humanities by closely analyzing literary and historical texts in terms of their internal connections with the geopolitical situation and in the context of the global economy. Through this work, Professor Spivak has successfully demonstrated the possibility of the humanities, such as comparative literature, to criticize the contemporary international political situation.

Underlying Professor Spivak’s worldview is a philosophy of life that impels her to come down from the pulpit and forge a path through “academic activism.” Retaining her Indian nationality, she teaches in the U.S.A. and attends discussions and gatherings around the world. She also pays periodic visits to her home state of West Bengal and works for literacy education in rural villages and translation of local literature in India and Bangladesh. Professor Spivak is committed to fulfilling what she regards as a profound and ethical responsibility toward minorities who have been deprived of language and history through an invisible structure of oppression, and her social work in this regard has earned her considerable empathy and sincere respect around the world.

For these reasons, the Inamori Foundation is pleased to present the 2012 Kyoto Prize in Arts and Philosophy to Professor Gayatri Chakravorty Spivak.