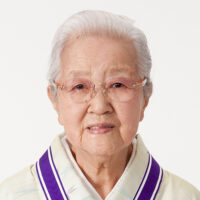 Philosophy of Tsumugi: The World of Fukumi Shimura

Ms. Shimura has developed her original style of art, commanding an extraordinarily colorful range of plant-dyed yarns as her visual vocabulary and unleashing her imagination to improvise an infinite resonance of colors over canvases of tsumugi kimono. Through a constant communication with nature and deep meditation, she has cultivated a “tender and flexible thought that advances to weave human existence into nature.”

Ms. Fukumi Shimura started her career as a dyeing and weaving artist after she became inspired by Muneyoshi (Soetsu) Yanagi’s Mingei Movement (the Japanese Folk Craft Movement). Since that time, she has made a profound study of the beauty of tsumugi (pongee) kimono, which Japanese peasant women traditionally wove for everyday use, and she has developed her own original style of art. Commanding an extraordinarily colorful range of mellow plant–dyed yarns as her rich visual vocabulary and giving free rein to her unique sensibility and creative imagination, she improvises an infinite resonance of colors over canvases of plain–weave fabric. Her work has not only broken stereotypes in Japanese tsumugi kimono, but also developed a radically new sense of beauty.

In various parts of the world, the process of making yarn, dyeing with plant-derived colors, weaving, wearing, and passing on memories has been performed without interruption from antiquity. Of all the varieties of fabrics, Ms. Shimura discovered infinite potential in the elegant simplicity of tsumugi.

Kusaki–zome, the Japanese technique of dyeing with various kinds of plants, is the act of “receiving colors” from nature. Ms. Shimura has striven to comprehend the mystery of nature, eventually coming into perfect synchrony with the complicated and delicate life phenomena of plants and perfecting the skills needed to make them manifest themselves in the form of exquisite colors. That, she implies, means to live in accordance with natural providence. Acknowledging the effect of celestial motions on the color of dyes, she works in harmony with the lunar phases, the cycle of the seasons, and the growth and decay of all living things.

“Plants do not yield green dyes. Why is it that the green hue that shows itself when the yarn is pulled up from an indigo jar disappears so quickly?” Asking herself this essential question, Ms. Shimura discovered a clue in the words of Johann Wolfgang von Goethe and Rudolf Steiner. Goethe says that Yellow appears next to the light; Blue appears next to the darkness; and Green appears when these two colors are mixed. Also, according to Steiner, “Green represents the dead image of life.” She encountered these thoughts while extensively exploring color theories around the world as well as the Japanese tradition of coloring, in her quest for this miraculous green plant color. This led her to a conviction that there is a “link with the invisible world” – and the discovery of the secrets of dyeing. The conviction and secrets have been reflected in her numerous works.

Ms. Shimura’s “philosophy of tsumugi,” formed through an intimate dialogue with nature, is a delicate and subtle concept which weaves human existence into nature. As such, it offers us suggestions as to the future course of humankind. Through the beauty of tsumugi backed by such deep contemplation, she pursues the fundamental human value of harmonious coexistence with nature.

For these reasons, the Inamori Foundation is pleased to present the 2014 Kyoto Prize in Arts and Philosophy to Ms. Fukumi Shimura.