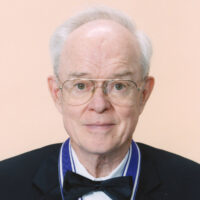 Professor Emeritus, The University of Chicago

Curiosity as a Career

Through his research on terrestrial, solar and cosmical magnetohydrodynamic phenomena, Professor Parker has produced numerous seminal physical concepts – not least among them the theory of the solar wind – opening new dimensions in earth and space sciences. His discoveries have made a significant contribution to the elucidation of various phenomena involving fixed stars, interstellar space, and the Galaxy, giving birth to new perspectives in astrophysics.

During his half-century of research on magnetohydrodynamic phenomena in the solar atmosphere and interstellar space, Professor Eugene Newman Parker has contributed to extending the frontiers of space science and astrophysics through the development of numerous theoretical concepts, not least among them the solar wind. His discoveries have cast light on the mechanisms of diverse solar-terrestrial phenomena—magnetospheric phenomena such as geomagnetic storms and auroras, the origin of the solar magnetic field, changes in corona activity and the solar wind, the magnetic field in the interplanetary space, comet tails, and modulations in the intensity of cosmic rays—and helped advance research on magnetohydrodynamic phenomena in stars, interstellar space and the Galaxy, revolutionizing our view of the universe.

Among Professor Parker’s many scholarly achievements, his theoretical prediction of the solar wind in 1958 deserves special mention. While it had been inferred from research on geomagnetic storms and related occurrences that clouds of ionized gas (plasma) emitted by the eruptions in the solar corona causes these phenomena, Professor Parker theoretically deduced that there must be a constant, supersonic flow of plasmas even in the absence of such eruptions. His theoretical prediction that the plasma flow was supersonic was particularly significant in challenging the old assumptions, and the validity of that prediction was proven several years later through direct observations by artificial satellites.

Professor Parker’s theory triggered drastic changes in our perception of interplanetary space. The concept of a supersonic solar wind constantly blowing through interplanetary space, formerly believed to be a vacuum, has provided the key to understanding a variety of solar-terrestrial phenomena.

Professor Parker has since applied magnetohydrodynamic theory to a broader range of phenomena, including ‘stellar wind’ and ‘galactic wind.’ He has also made an important contribution to the dynamo theory of planetary magnetic fields, long a difficult question. Professor Parker’s book, Cosmical Magnetic Fields: Their Origin and their Activity (1979), is regarded as the Bible of cosmic magnetohydrodynamics and related fields. He has authored over 300 scientific papers, most of which he produced alone. His insatiable scholarly pursuits have also contributed to the advancement of space development and basic sciences.

Professor Parker has applied his studies of magnetohydrodynamic phenomena to the elucidation of many cosmic phenomena involving the sun, space, fixed stars, and the galaxy, thereby contributing to the advancement of astrophysics.

For this reason, the Inamori Foundation is pleased to present the 2003 Kyoto Prize in Basic Sciences to Professor Eugene Newman Parker.