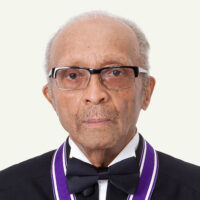 The World of Cecil Taylor: Structure and Improvisation

One of the most original pianists in the history of free jazz, Mr. Cecil Taylor has developed his innovative improvisation departing from conventional idioms through distinctive musical constructions and percussive renditions, thereby opening new possibilities in jazz. His unsurpassed virtuosity and strong will inject an intense, vital force into his music, which has exerted a profound influence on a broad range of musical genres.

Mr. Cecil Taylor is a leading piano exponent of the “free jazz” movement that emerged in the late 1950s. His strong black consciousness, extraordinary virtuosity, and indefatigable willpower have made him a master of improvisation who has left a significant mark on jazz and African-American music circles.

Born in New York in 1929, Mr. Taylor studied at the New England Conservatory of Music. In the conventional form of jazz music, a series of ad-lib solos often follows the theme melody based on its chord progression before the reprise. However, amid growing interest in extemporaneity and “chance” in the modern music world of the late 1950s, Mr. Taylor defied this formula and invented a unique and vigorous style of improvisation based on phrase units. In the early 1960s, he further explored an innovative method of interplay that broke out of the steady-pulse framework and instead drove in instantaneous beats, thus dramatically expanding freedom in musical expression. He co-founded the Jazz Composers Guild in 1964, which became a major wellspring for the free jazz movement and led to the formation of the Jazz Composer’s Orchestra. He recorded a historic performance with it in 1968 that demonstrated his piano style successfully translated into an orchestral piece. Along with this epic recording of free jazz, his Conquistador! and Unit Structures albums, both recorded in 1966, are regarded as defining works in the history of jazz.

There is no denying that his percussive renditions, involving tone clusters often played with palms, and the complex and polyrhythmic construction of his music owe something to the avant-garde language of European music. However, Mr. Taylor himself interprets these attributes as an abstract and radical evolution of styles traditionally employed by African-American pianists, with origins in stride piano. After the 1960s he draws on only his own compositions and deconstructs melodies and rhythm patterns while repeating them with intense key strokes. Thus he perfects his unique style of an impulsive stream of phrase units and tone clusters.

In the late 1980s, he devoted more time and effort to performing in Europe, playing and recording with local improvisers. This experience resulted in his production of such works as a monumental 11-CD box set recorded in Berlin. This compilation captured explosive moments when the European tradition of free improvisation, originating in the 1960s, set off sparks against Taylor’s spiritually deep and unyielding form of expression which is based on the African-American tradition.

Mr. Taylor has pursued a career as a creator with his artistry conveyed in multiple forms. In addition to musical performances ranging from solo pieces to collaborating with orchestras, he also dances and recites poetry onstage. He often performs with other dancers and dance companies, and publishes poetry collections that powerfully evoke his African-American identity.

Mr. Taylor is a deeply original artist who has uncompromisingly dedicated his whole 60-year career to artistic creation and achieved immortal contributions to the field of African-American music.

For these reasons, the Inamori Foundation is pleased to present the 2013 Kyoto Prize in Arts and Philosophy to Mr. Cecil Taylor.

1929
Born in New York, U.S.A.
1947
Studies at the New England Conservatory of Music
1950
Forms his first quartet with soprano saxophonist Steve Lacy
1956
Appears with his group at the Five Spot, New York; Records his first album Jazz Advance
1960
Works regularly with alto saxophonist Jimmy Lyons and drummer Sunny Murray (replaced by Andrew Cyrille and others after mid 60s)
1962
First tour to Europe with his group
1964
Participates in the October Revolution in Jazz and co-founds the Jazz Composers Guild
1966
Records Unit Structures and Conquistador!
1970
Starts solo concerts
1975
Elected into Down Beat Jazz Hall of Fame
1987
Records Chinampas featuring his poetry reading
1988
Appears at “Improvised Music II/88” in Berlin presenting him with many European free improvisers
1989
Forms the Feel Trio with bassist William Parker and drummer Tony Oxley
1999
Appears at a Library of Congress Concert, Washington, D.C.
2006
Featured in the documentary film All the Notes by Chris Felver