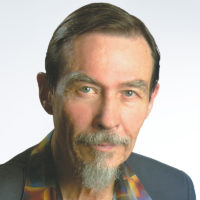 A Personal Journey Through the Information Revolution

Place：You can enjoy this year’s lectures on the 2022 Kyoto Prize Special Website.

Carver Mead proposed and promoted a new methodology to divide the increasingly complicated design process of very large-scale integration (VLSI) systems into logic, circuit, and layout designs, and to separate them from the manufacturing process. He also contributed greatly to the advancement of computer-aided design technology and paved the way to the electronic design automation of VLSIs that led to the immense development of VLSI-based electronics and industry.

In the early stages of VLSI (very large-scale integration) development, Carver Mead paid attention to the increasing complexity of its design and manufacturing processes. He proposed a new methodology to divide the design process into three stages, namely, logic, circuit, and layout designs, and to separate them from the manufacturing process. By employing computer-aided design (CAD) technology in each stage of the design process, he helped establish the basic framework for VLSI design, facilitated the separation of system design from device fabrication, and thus enabled efficient synergies between the two. Consequently, he laid the foundation for intercorporate/international division of roles in VLSI design and fabrication, and contributed greatly to the development of VLSI-based electronics technology and industry.

In the late 1970s, it was predicted that advances in miniaturization of devices in integrated circuits (ICs) would enable the realization of VLSI systems comprising billions of transistors (1). Mead revised radically the design process for increasingly complex VLSI systems, and proposed a method to simplify and standardize the process of layout design which had previously varied among manufacturers. He also developed CAD technology for VLSI systems, and enabled the separation of the design process, including the logic and circuit design stages, from the manufacturing process (2). This achievement paved the way for electronic design automation that covered a text-based description of the system operation and the automatic generation of the layout required for chip manufacturing. Thus, he established the guiding principles for VLSI system design involving billions of transistors on a single chip.

The book entitled Introduction to VLSI Systems (3), co-authored with Lynn Conway, described a clear methodology (4) for system designers to perform VLSI design without knowledge of complicated manufacturing processes. It allowed many engineers and students to participate in VLSI design, prototype fabrication, and testing, and thus contributed considerably to the subsequent progress of VLSI. In particular, the book described multi-project chips used in Mead’s microelectronics course at the California Institute of Technology since 1971 (5). This concept enabled the prototyping of chips at a reasonable cost by fabricating multiple, individually designed IC systems on a single wafer. All these accomplishments contributed enormously to the acceleration of education, research, and development which involved ICs, LSIs and VLSIs.

Mead also predicted that the large part of the VLSI industry would be divided into many design companies (fabless) and a far-smaller number of specialized manufacturers (fabs). This prediction laid the foundation for the complementary division of tasks and roles among various corporates (6). It is safe to say that the semiconductor industry centered on VLSI would not have existed without these contributions. VLSI has been incorporated into a variety of industrial products, including home appliances, vehicles, mobile phones, and computers. It is no exaggeration to state that these contributions have ushered in our current information-based society.

For these reasons, the Inamori Foundation is pleased to present the 2022 Kyoto Prize in Advanced Technology to Carver Mead.