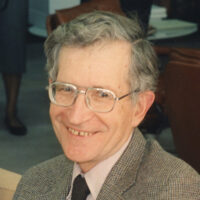 Language and Mind: Challenges and Prospects

He proposed “the theory of generative grammar” and marked the beginning of a major revolution in linguistics, which provided an ambitious program to explain the structure of the human mind. He has encouraged the formation of cognitive science by giving it a basis in his theory.

＊This field then was Field of Cognitive Science (in the wide sense).

Dr. Chomsky is well recognized and respected for his revolutionary and epoch-making linguistical account titled, “The Generative Grammar Theory.” In this work, he established a highly developed system for elucidating the structure and workings of the human mind. This consequently gave birth to a new discipline known as cognitive science, a study built on an interdisciplinary collaboration of psychology, information science, linguistics, neurophysiology, and philosophy. Dr. Chomsky’s theory provides the underlying structural foundation for cognitive science.

Previous to the establishment of Dr. Chomsky’s Generative Grammar Theory, linguistical studies focused mainly on the recording of characteristic structures of each language and a subsequent classification thereof. However, they failed to establish an approach for illustrating linguistic universality. Linguistic philosophical principles were based on the notion that language was a behaviorally acquired experience learned from the surrounding environment and ignored the underlying intrinsical elements. Dr. Chomsky recognized that there was a general principle underlying the apparent disparities and differences and that this principle was common to all human languages. He reasoned that this universality was inherently common to human nature as it is rooted in the essence of humanity itself. By conducting research on the commonality of linguistic principles, Dr. Chomsky believed that not only linguistic structure, but also human mental processes, namely the structure of man’s inherently acquired reason, could be understood.

Along with the significant influences on linguistics and information science, Dr. Chomsky’s theory has led to the establishment of cognitive science, providing a sound theoretical basis. His work has also had a major influence on contemporary philosophy.

Dr. Chomsky is currently a professor at the Massachusetts Institute of Technology where he is actively involved in research activities. He is still at the forefront of the field. By refining and extending his general theory, Dr. Chomsky has recently proposed “The Parameter Theory” which explains the grammatical differences between common universal structure and various languages. He is a true intellectual and a science man who conducts scientific research with peaceful intentions for the prosperity of humanistic values. He has trained and influenced many talented people and still maintains a dedicated and disciplined academic life.

Dr. Chomsky’s theoretical system remains an outstanding monument of 20th century science and thought. He can certainly be said to be one of the great academicians and scientists of this century.