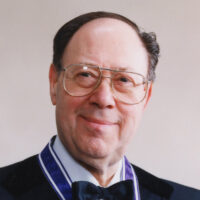 Creativity and Innovation in a Large System Environment: a Personal Account

Telecommunication Technology Innovation and its Influence on Society

Pioneering Contribution to the Electronic Switching Technology for Telecommunications, Especially that Based on the Concept of "Stored Program Control

＊This field then was Field of Electronics, Telecommunications, Lasers, and Control Engineering.

Especially noteworthy was Mr. Joel’s advocacy of the key concept of “Stored Program Control,” and with its proof he opened the door to the upgrading and free modification of the functions of electronic switching so as to meet public needs. It is no exaggeration to say that, without his ingenious concepts, it would have been impossible for the communications network to remain congruent with our diverse and highly technological society.

Telecommunications networks are the largest scale systems devised by mankind, exerting a great influence on economic and social life as well as related industries. The present worldwide telecommunications network based upon the telephonic network will adopt the ISDN (Integrated Service Digital Network) system as the infrastructure for the future’s advanced information society.

His first published research on the subject of electronic switching dates back to the September 1956 issue of the “Bell System Technical Journal,” where the key concept we identify with current electronic switching was already put forward. This is remarkably early when one considers computer technology itself was then limited solely to specialized calculations for science and technology. By 1965, the switching technology based on Stored Program Control was being utilized as the electronic switching system for the public communications network in the United States.

The influence of the development of electronic switching undertaken at Bell Laboratory has been globally significant. Since that time large-scale research has been undertaken in every nation. Research to enhance the capability of communications networks using such advances as the introduction of digital switching systems and the adoption of the Integrated Service Digital Network has also been ongoing in every country.

These achievements are due not only to Mr. Joel’s high intelligence and deeply specialized knowledge, but also to his warm sincere personality and executive ability. In 1987 he was honored as the “Father of the ISS International Electronic Switching Conference” and has been affectionately known as “Mr. Switching.”

During World War II, he invented the digital confidential communications system as well as the world’s first all-purpose digital computer, which is an indicator of the extent of his achievements in a wide range of fields. In view of the excellence and great societal influence of his electronic switching system, it is indeed fitting that he be amongst those selected as recipients on the occasion of the 1989 Kyoto Prizes.