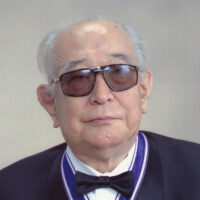 My View of Movies

A film director who has created many outstanding works including Rashomon in his long career. The penetrating insights into humanity, profoundly humanitarian themes, and powerful original expressiveness of his films have deeply impressed audiences the world over.

Mr. Akira Kurosawa is a world-famous film director in Japan. Over this half century, he has continuously presented masterpieces which deeply affect audiences through his insights into human nature; unshaken humanism; and powerful, and drastic expressions through all his works.

Mr. Kurosawa began his career as a painter, showing extraordinary talents. But, later he chose to become a film director. Since his first film in 1943, Mr. Kurosawa has perfected topics that portray human characters who courageously fight adversities in life. His representative works, “Ikiru”(To Live), and “Seven Samurais” both are salient in their portrayal of the noble and strong-willed characters who face severe challenges but choose to live bravely with their strong sense of righteousness, mission, and death-defying courage. His “Rashomon” became the first memorable Japanese film to attract worldwide attention. Mr. Kurosawa sought his material throughout the world, including Shakespeare, Dostoyevski, and even today’s American television dramas. But in each case, he transplanted them to a Japanese cultural environment and created dramas that pursued the essence of human nature.

Another characteristic of Mr. Kurosawa’s works is their original expressions. The scorching heat in the bush as shown in “Rashomon,” the pouring rain in the fighting scene of “Seven Samurai” are examples of often violent expressions which are related intimately with the theme. His abundant artistic talent as a painter allowed him to make effective uses of montages, and created a new aesthetic form with each new work, keeping the “Kurosawa” style at the vanguard of his art.

The fact that Mr. Kurosawa’s works have won many awards at international film festivals is evidence of his works worldwide esteem. Moreover, we should recognize that the powerful handing of themes and rich expressions in Mr. Kurosawa’s works have stimulated many other filmmakers in the world and greatly influenced the development of cinematography.

While his works contain such high artistic values, the primary charm of Mr. Kurosawa’s film is that never fail to fulfill the audience’s enjoyment of movies.

At 84, Mr. Kurosawa is still at the forefront, burning with his zeal to create films that open new territory. Mr. Kurosawa is at the pinnacle of 20th Century cinematography and is the most befitting recipient of the 1994 Kyoto Prize in Creative Arts and Moral Sciences.