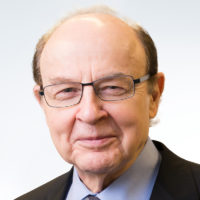 Arnold and Mabel Beckman Professor of Biochemistry and Molecular Biology, The Rockefeller University

Regulation of Transcription in Animal Cells: A 50-year Journey Revealing an Expanding Universe of Factors and Mechanisms

Discovery of the Principle of Gene Transcription Mechanisms in Eukaryotes

Robert G. Roeder has revealed the principle of the regulatory mechanism of transcription in eukaryotes through his over 50 years of transcriptional research, by identifying functions of a series of factors such as three distinct RNA polymerases, basic transcription factors, one of the first gene-specific factors, and regulators in transcription from chromatin. Through his achievements, he has made significant contributions to develop present life science.

Robert G. Roeder has identified in animal cells a series of factors involved in the initiation of transcription from DNA to RNA and has revealed their functions. He elucidated the principle of gene expression mechanisms in eukaryotes and laid the foundation for current life sciences.

Using a “cell-free reconstitution system” which reproduces transcription reaction in vitro, in 1969, Roeder first identified three distinct RNA polymerases designated as Pols I, II, and III in eukaryotes (1), and by 1974, discovered that Pol I transcribes precursor RNAs such as those for 28S, 18S, and 5.8S ribosomal RNA (rRNA); Pol II transcribes precursor mRNA; and Pol III transcribes 5S rRNA and tRNA (2, 3). He further purified each RNA polymerase, combined each with various fractions of nuclear extracts in the reconstitution assays, and revealed that transcription is initiated by multiprotein complexes called preinitiation complexes (PICs), formed by each RNA polymerase with general transcription initiation factors. These PICs bind to DNA sequences called promoters near the transcription initiation sites (4–9).

In eukaryotes, DNA wraps around histone octamer, forming nucleosomes that make up the chromatin. Roeder further extended his study to examine the transcription mechanism from chromatin DNA. He discovered that binding of the activator-driven PIC to the promoter occurs in a mutually exclusive manner with nucleosome assembly (14, 15), and further showed in the reconstitution system that modification of the histone N-terminal tails was indispensable for transcription of chromatin DNA (16). These studies of Roeder culminated in 2006 in the reconstruction of a machinery of more than 80 polypeptides that initiates and elongates transcription from inactive chromatin (17).

Roeder, who has devoted his life to transcription research for over 50 years with ceaseless efforts, has thus discovered the RNA polymerases, the general transcription factors, the prototype of gene-specific factors and their functions, and mechanisms of transcription from chromatin, thus elucidating the principle of transcription mechanisms in eukaryotes and making outstanding contributions to the development of life sciences.

For these reasons, the Inamori Foundation is pleased to present the 2021 Kyoto Prize in Basic Sciences to Robert G. Roeder.