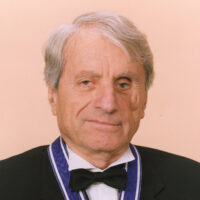 Mr. Xenakis is considered a 20th century giant in the world of music, for his outstanding achievements. Viewing music as a physical acoustic phenomenon, he has established techniques for creating music mathematically. His compositions, consistently with the aid of computer science, from his first Metastasis through such representative works as Atrées, richly render a humanistic and spiritual cosmos liberated from the traditional European paradigm. Mr. Xenakis has unveiled a totally new dimension to the history of music.