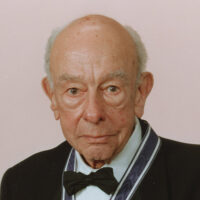 Developing countless sensational arguments filled with insight covering fields from epistemology to philosophy of language and science, Dr. Quine has created a new paradigm of philosophy for the second half of the 20th century.

＊This field then was Field of Philosophy.

A great analytic philosopher, Dr. Willard Van Orman Quine, has made outstanding contributions to the progress of philosophy in the 20th century by proposing numerous theories based on keen insights in logic, epistemology, philosophy of science and philosophy of language.

Dr. Quine’s first major achievements were in the fields of mathematical logic and set theory, in which he formally simplified B. Russell’s logical system. While actively engaging in theoretical exchanges with logical positivists in Europe, he fundamentally restructured their theories in the pragmatic tradition of American philosophy. As a result, he founded an original holistic philosophy, which can be characterized as radicalized empiricism.

Traditional empiricism holds that in testing a scientific hypothesis, an individual statement is compared with an empirical fact. Dr. Quine pointed out, instead, that in such testing, statements will be subject to comparison with experience as a collective whole (the Quine – Duhem Thesis). This holistic theory of knowledge overturned the dualistic epistemological assumption of the logical positivists, which distinguished “analytic statements” (such as the statements in mathematics and logic), in which truth is established independent of experience, from “synthetic statements” (empirical statements), in which truth is established only through experience. Because the distinction between the analytic and the synthetic was an assumption shared by the philosophy of rationalism as well as Kant’s critical philosophy, Dr. Quine’s attack on this distinction is tantamount to a fundamental criticism of traditional Western philosophy. In place of traditional epistemology, Dr. Quine proposed a new conception of philosophy as a theoretical undertaking that is inherently related to natural sciences (Naturalized Philosophy).

Furthermore, Dr. Quine pointed out that in translating between two mutually unrelated languages two or more translation manuals that are empirically, equally adequate but logically incompatible may exist (the Indeterminacy of Translation Thesis). This discovery in the philosophy of language has not only given rise to fundamental questions regarding the meaning of words and the reference to objects but has also served to provide a logical basis for discussing a wide range of issues, such as cultural relativity and mutual comprehension of different world views.

The achievements of Dr. Willard Van Orman Quine, supported by his rigorous logical analysis, have contributed greatly to revitalizing and deepening the discussion of the fundamental problems of philosophy. It is impossible to discuss contemporary philosophy without mentioning Dr. Quine’s achievements. For these reasons, the Inamori Foundation is pleased to bestow upon Dr. Willard Van Orman Quine the 1996 Kyoto Prize in Creative Arts and Moral Sciences.