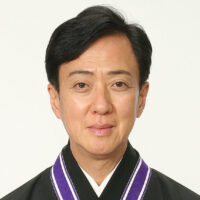 My Thoughts on the Performing Arts

The World of Tamasaburo: Creation of Elegant Beauty

Tamasaburo Bando, as a male actor specializing in female roles, has created his own unique world with his performances in Kabuki and established his position as the leading actor of female roles, although not born into a Kabuki family. He is also an internationally active performer in various genres of performing arts and holds countless audiences spellbound with his unsurpassed artistry.

Tamasaburo Bando, although not born into a distinguished family of the Kabuki world, has virtually become the tate oyama, or leading actor of female roles, in today’s Kabuki scene. The range of his activities is not limited to Kabuki and he has contributed to other genres of performing arts with great distinction as well.

As a Kabuki actor, in 1969 Tamasaburo was selected to play the role of Princess Shiranui in Chinsetsu Yumiharizuki (The Moon Like a Drawn Bow), a shinsaku (newly-created) Kabuki drama by Yukio Mishima. The following year he captured the spotlight for his performance as Omiwa in Imoseyama Onna Teikin Goten (At the Palace on Mount Mikasa from The Teachings for Women). Since that time, he has established his position as tate oyama by taking on the personae of Masaoka in Meiboku Sendai Hagi (The Disputed Succession), Sadaka in Imoseyama Onna Teikin Yama no Dan (The Mountain Scene from The Teachings for Women), and Tonase in Kanadehon Chushingura (The Treasury of the Forty-Seven Loyal Retainers). He has also created his own unique world with his performances in Sakurahime Azuma Bunsho (The Scarlet Princess of Edo) and Osome Hisamatsu Ukina no Yomiuri (The Scandalous Love of Osome and Hisamatsu) by Namboku Tsuruya. At the same time, Tamasaburo has also been actively involved in other genres of theater. In 1975, he collaborated with the shimpa (new school) in Kyoka Izumi’s Keiko Ogi co-starring Yaeko Mizutani I, and played the role of Lady Macbeth in Shakespeare’s Macbeth in the following year. In 1981, he appeared in Curlew River, an opera written by Benjamin Britten based on the Noh play Sumida-gawa (The Sumida River). In 1984, he was invited to represent Japan in the Metropolitan Opera Centennial Gala, sharing the spotlight with such stellar performers as chanson singer Yves Montand, ballet dancers Rudolf Nureyev and Margot Fonteyn, and opera singer Plácido Domingo. His performance of Sagi Musume (The Heron Maiden) attracted worldwide attention.

In 1988, Tamasaburo appeared in Sawako Ariyoshi’s Furu Amerika ni Sode wa Nurasaji (The Cloistered Flower of Yamato Protects Her Kimono Sleeve from the Alien Rain), which was premiered by the Bungakuza Theatre Company starring Haruko Sugimura. In 1997, he played the leading role in Junji Kinoshita’s drama Yuzuru (The Twilight Heron), and in 2007 he gave marathon performances of Kyoka Izumi’s works for an entire month under his own supervision and direction – the first such event at Tokyo’s Kabuki-za Theater. Meanwhile, he has also been an internationally active performer in various genres; he participated in Béjart’s Ballet Gala (choreographed by Maurice Béjart) in 1988, starred in Nastasja (script and direction by Andrzej Wajda) in 1989, and shared the stage with ballet dancer Mikhail Baryshnikov in 1998. Most recently, he went to China to participate in the Suzhou Kunqu Opera Theater in Jiangsu Province, playing the lead role in their Kunqu opera, The Peony Pavilion, in Beijing in 2008. Tamasaburo is without peer—based on his female Kabuki roles (onnagata), he makes a multifaceted world come alive in numerous different performing arts, and continues to hold countless audiences spellbound with his unsurpassed artistry. He is also an acclaimed film director and actor, and has performed alongside the Japanese taiko drum ensemble Kodo.

For these reasons, the Inamori Foundation is pleased to present the 2011 Kyoto Prize in Arts and Philosophy to Tamasaburo Bando.

1950
Born in Tokyo, Japan
1957
Debut under the stage name of Kinoji Bando
1964
Succession to the 5th Tamasaburo Bando
1969
Plays the role of Princess Shiranui in Chinsetsu Yumiharizuki (The Moon Like a Drawn Bow) written by Yukio Mishima
1975
Plays the role of Princess Sakura in Sakurahime Azuma Bunsho (The Scarlet Princess of Edo)
1984
Invited and performs Sagi Musume (The Heron Maiden) in the Metropolitan Opera Centennial Gala
1988
Appears in the Béjart’s Ballet Gala choreographed by Maurice Béjart
1989
Stars in the theatrical piece Nastasja directed by Andrzej Wajda
1991
Directs his first film Gekashitsu (The Operating Room)
1995
Plays the role of Masaoka in Meiboku Sendai Hagi (The Disputed Succession)
2008
Stars in the Kunqu opera The Peony Pavilion in Beijing