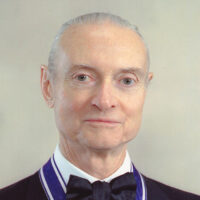 Painting and Comic-strip - Some Problems of Pop-art

An artist, who through his original mode of expression, has had a considerable influence on contemporary fine art for more than 30 years, since he rose to fame in 1960s as a flag-bearer for pop art. He has given the world many magnificent works of art: works that ask poignant questions of the essence of expressive art and its role in society.

＊This field then was Field of Arts (Painting, Sculpture).

In a career spanning more than 30 years since his emergence as a standard-bearer of pop art in the 1960’s, Mr. Roy Lichtenstein has continuously exercised great influence on art through his original method of expression and has produced many outstanding works which have sharply reexamined the very fundamentals of art and its role in society.

Mr. Lichtenstein’s early works, based on the remarkable idea of using enlarged images taken from comic strips and supermarket advertisements, catapulated him to fame, and he soon came to be counted as one of the most influential artists in pop art circles. His first work which incorporated the popular image of Mickey Mouse, had a major impact on the art world of the day and is now considered to be a work of historical significance. In his early pop art works, he deliberately selected familiar everyday images, and by enhancing and enlarging them succeeded in astutely illustrating the fundamental nature of American consumer society, characterized by popularity and anonymity. The works are, therefore, extremely important from a social standpoint as well. Indeed, one of the basic roles of art is to serve as a mirror of its times by portraying society in condensed form.

Mr. Lichtenstein’s remarkable powers of expression can be seen clearly in the cheerful appeal of his early works, proof that even everyday images can be transfigured into works of art. His magnified pointillism and hatching techniques and his strong outlines, together with a palette limited to red, yellow, blue, black, white, and green, give his works their unique quality. As a result, he has made it possible for art to be understood and enjoyed by the general populace instead of only an elite few.

Later Mr. Lichtenstein reinterpreted the works of great masters both past and present, artists such as Monet, Picasso, and Matisse. He produced a series which reexamined the basic concepts of the visual arts, such as Brushstrokes and Mirror and also recreated architectural motifs and decorative patterns in the form of paintings. He has continued to unveil a wide variety of works, all of which consistently question and probe. These works have created a world which exudes a totally new meaning and expression, even though they incorporate only well-known themes. His simple and distinct style is expressed not only in paintings but also in sculpture and murals. All his works are full of creativity and originality: bright, strong expressions which have given great pleasure to many.

Through the medium of pop art, the most important art movement of the 20th century, Mr. Roy Lichtenstein has given art to the masses, enabling anyone and everyone to enjoy it. To this day he continues to stimulate the art world, and is thus most worthy of the 1995 Kyoto Prize for Creative Arts and Moral Sciences in the field of arts.