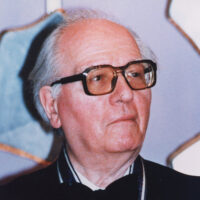 The greatest music composer of the 20th century. His music is the freely embraced non-classical position, which attempted to bring contemporary expression to Catholicism. Among his masterpieces are “Catalogue d’Oiseaux,” and “La Transfiguration de notre Seigneur Jésus Christ.”

*This category then was Category of Creative Arts and Moral Sciences.

Mr. Olivier Messiaen is the greatest composer to have emerged from 20th century France. An organist who studied musical composition and related subjects at Conservatoire de Paris, he has since become steadily more involved in composition. He has written theoretical work such as “Technique de Mon Langage Musical” and as an educator has helped to develop the musical talents of such renowned persons as Pierre Boulez and Karlheinz Stockhausen.

Mr. Messiaen’s music, fundamentally related to his Catholic faith, is an effort to impart contemporary expression to Catholicism. That is to say, his music is an attempt to universalize the musical concept by active dependence upon Catholicism.

To thus universalize the music, Mr. Messiaen created his own method of composition, his aim being to create a new, pantheistic approach to expressing the true meanings of Catholicism. In other words, his music is the freely embraced nonclassical position, which rejects simple adherence to the traditional approaches to Catholic music.

One of his interests is in rhythm; his desire to seek out all possible rhythms beyond the frames of time and space resides at the heart of his music. It was in his theoretical pursuit of rhythmic sense that his own theories, such as “added value” technique and “non-retrogradable rhythms” evolved in their uniqueness.

Another characteristic of Mr. Messiaen’s music appears in unique melodies. He does not follow the classic mode, which develops motifs organically; at a glance, his structure appears to contain numerous mechanical repetitions. Closer examination, however, reveals this music to have a unique sense of order, achieved by repetition of certain kinds of patterns. Mr. Messiaen’s music thus comes to generate a certain special kind of beauty.

Mr. Messiaen’s is a master musician who has followed his own path among the various musical currents of the twentieth century, and has won a high place among the world’s greatest living composers. Already the recipient of the Rhineland Prize and the Erasmus Prize, he has thus been adjudged as most worthy of the first Kyoto Prize in the field of Creative Arts and Moral Sciences.