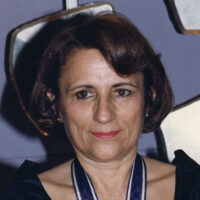 Director, Institute of Embryology at C.N.R.S.

The Exciting Potentials of Biology

Searching for How Animals Develop

A biologist who invented a new technology to produce quail-chick chimeras from chickens and quails. Thereby, the development of the nervous and immune systems in higher animals was illuminated. She has made significant contributions to the establishment of the method known as “Embryo Manipulation.”

The process of animal development, which involves dramatic changes starting from the simple form of an egg and growing to an elaborate organization, has attracted the attention of biologists for many years. The total understanding of this process, however, has been insurmountably difficult and constitutes one of the most important themes for biology today. One of the difficulties is to find out the very basic facts about how each cell, the basic unit of an organism, behaves in the process of development.

Prof. Le Douarin invented a new technology to produce quail-chick chimaeras from chicken and quail embryos, and devised the quail-chick cell marker system. She was thus successful in elucidating very clearly the migration of various cells from the primordium along specific routes and the course of their development into adult organs mainly in the nervous and immune systems. She established the basis for illuminating at full scale the development of the nervous and immune systems in higher vertebrates, which had not been clearly studied before her introduction of such new technology.

With the success of this new research method Prof. Le Douarin has established a new approach to the study of development at the cellular level, and she has made a significant contribution to the establishment of a new research technology, called embryo manipulation. In so doing, she has opened a new era in developmental research. The study of the development of the nervous and immune systems of animals has been especially needed, because these systems play critical roles in supporting the life of higher animals, including Homo sapiens.

Through her recent studies on the various functional disorders of the nervous system arising in chimaeras with respect to the development of the immune system, she has shown that the use of chimaeric animals presents a completely new viewpoint for investigating human nervous diseases. Her technology and research on developmental biology, which have opened up a bright future for the basic understanding of the causes of serious human diseases, are most worthy of the Kyoto Prize, especially in the “Age of Biology” when other sciences and technologies are learning so much from living organisms.

1954
Graduated from University of Paris, Bachelor of Science
1954
Lycee teacher of natural sciences
1960
Research member of C.N.R.S.
1964
Doctor of Science Degree
1965
Lecturer in Faculty of Science at Clermont-Ferrand University
1971
Professor at Nantes University
1975
Director of Institute of Embryology at C.N.R.S.

1975
Tracing of Cells of the Avian Thymus through Embryonic Life in Interspecific Chimaeras (with F. Jotereau)
1982
The Neural Crest
1985
Mapping of the Early Neural Primordium in Quail-Chick Chimaeras: I. Developmental Relationship between Placodes, Facial Ectoderm and Proscephalon (with G. F. Couly)
1986
Post-natal Development of a Demyelinating Disease in Avian Spinal Cord Chimaeras(with M. Kinutani and M. Coltey)