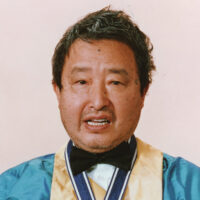 Artist Linking Asia and the World

Mr. Paik, an artist representing this high-tech age, has always been a pioneer, opening up new and rich worlds of creation, providing his contemporaries with visions and dreams. To modern art, he introduced the genre now known as ”video art,” which he then developed into ”media art.”

Mr. Nam June Paik is the most outstanding figure in creative arts of this high-technology age. A completely new genre called “video art” was introduced to the world of modern art by Mr. Paik. He later developed it to a further innovative art form that is now familiar as “media art.” Thanks to his works, his contemporaries have found new visions; he has made possible new realms of creation.

During the 1960’s Mr. Paik originated performance art using TV monitors, and joined an international artist group,”Fluxus.” With John Cage and Merce Cunningham, Mr. Paik produced “video art” and became a leading artist in that field. Since then, he has been creating various “installation” works as a pioneer of contemporary media installations.

Modern technology has been developed in pursuit of its practical advantages, including its contribution to convenience and economic efficiency. As a result, human sensibilities and perception systems are greatly affected. Under such circumstances, Mr. Paik believes in the necessity of “humanizing” technology through art, and has transformed television from a one-way medium of providing information to a means of expressing human creativity.

Various real-time interactive communication projects using broadcasting satellites were produced based on his media concept. “Good morning, Mr. Orwell,” the first of such projects, was broadcasted in 1984. In this project, Mr. Paik demonstrated the possibility of using media as a new communication means, in contrast with the prospect of George Orwell, who depicted media-controlled future society in his novel “1984.” In 1986, Mr. Paik produced another TV project that linked New York, Tokyo and Seoul. This program, titled “Bye Bye Kipling,” was his reply to Kipling, who wrote in his work that the East and West could never understand each other. In this program, Mr. Paik refuted the Eastern view of “incompatible West” and the Western view of “incomprehensible East,” and attempted to build a global communication network. His project created a sensation. Mr. Paik focused on a computer’s most important function as a means of communication, before even scientists could properly handle this strategic role of a computer. He attempted to materialize McLuhan’s concept of environmental art by means of the various functions of computers, greatly affecting the world of modern art, as well as traditional philosophy and sociology, which had been unable to cope with the computer age. In other words, he prepared a perfect model of the internet.

Mr. Paik’s lifelong ambitions include building global communication networks that involve people worldwide, and seeking mutual understanding among peoples of different cultures. Underlying his pursuit of these themes are his difficult time under severe political situations in his home country, South Korea, and his identity as an Asian. Through his efforts in pursuit of his ambitions, he has contributed to the diversification of artistic forms, and helped restore the fundamental function of art, thereby imparting new philosophical objectives to science and technology.

For these reasons, the Inamori Foundation is pleased to bestow upon Mr. Nam June Paik the 1998 Kyoto Prize in Creative Arts and Moral Sciences.