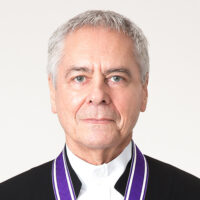 Moving People: Dance as the Living Shape of Emotion

A Choreographer Who Developed 20th Century Ballet to New Levels, and Continues to Lead the Global Dance Scene Today

Mr. Neumeier is a world-leading choreographer who specializes in applying traditional ballet technique and vocabulary to maximize the potential for bodily expression and capture the details of human psychology. He has gradually combined the essence of two genres, dramatic ballet and abstract ballet, thereby raising the art to a new level.

Mr. John Neumeier is a choreographer who uses traditional ballet techniques and vocabulary to broaden the range of bodily expression while pursuing a penetrating inquiry into human psychology. Born in 1942 in Milwaukee, Wisconsin, U.S.A., Mr. Neumeier studied literature and dance before joining the Stuttgart Ballet in 1963. Inspired by the creative atmosphere of that company, which served as a spearhead of the innovative theatrical dancing of the era, his talent soon blossomed. He was invited as the artistic director to the Hamburg Ballet in 1973, where he has now served for more than four decades. More recently, he has been tirelessly creating full-length works of ballet while continuing to play a leading role in the international ballet community.

Mr. Neumeier’s oeuvre can be divided into three categories: “re-interpretation of classical ballet in the modern context,” as exemplified by Illusions—like “Swan Lake”, “adaptation of literary works,” including Lady of the Camellias and “abstract ballet based on classical musical masterpieces” such as Third Symphony of Gustav Mahler. His mastery is beyond comparison in how he transforms physical virtuosity into a way of expressing internal emotions as well as in giving insightful interpretations to the original works. His creative approach is highly intellectual, as evidenced by his sophisticated mise-en-scène including lighting effects. Underlying these aspects are intense emotions involving romantic love, empathy with the ballet characters, and a deep love of humanity. It is for these reasons that the world’s leading ballet companies and dancers are so eager to add his works to their repertories. Additionally, with his deep interest in Japanese culture, Mr. Neumeier has presented a wonderful representation of Japanese sensitivity and lyricism, and the sense of seasonal changes that forms the background to such sentiments, in Seven Haiku of the Moon and Seasons—The Colors of Time, both commissioned by the Tokyo Ballet.

Since the dawn of the 20th century, the evolution of ballet has taken two divergent paths. One is that of “danced dramas,” which make a clean break from the romantic fairy tales of the 19th century and focus on more realistic human portrayals. The other is the “visualization of music,” which is closely aligned with musical constructions.

Based on a strong conviction that dance is a unique art form that can express the full spectrum of human emotion and psychology through body movements, Mr. Neumeier has combined the essences of the two genres, thereby raising the art of ballet to yet another level of sophistication. By performing his ballets, great dancers have achieved even more artistry, and their performances help bring to maturity the entire community of ballet, including the audience. His works never fail to inspire the kind of profound meditation that serves as a creative starting point among the choreographers of the next generation. Consequently, Mr. Neumeier will certainly continue to exert a major influence on the future of ballet as an art form.

For these reasons, the Inamori Foundation is pleased to present the 2015 Kyoto Prize in Arts and Philosophy to Mr. John Neumeier.