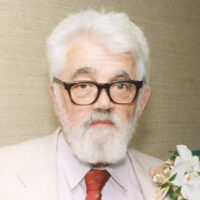 The Logic and Philosophy of Artificial Intelligence

Fundamental Contribution to the Field of Artificial Intelligence and the Invention of LISP, a Programming Language

＊This field then was Field of Computer Science and Engineering, Artificial Intelligence.

Dr. John McCarthy, born in Boston in 1927, was admitted to the California Institute of Technology at the age of 16. There, he became interested in artificial intelligence (A.I.) during his undergraduate studies. Beginning with his postgraduate work at Princeton University, he has pioneered approaches to the fundamental problems of A.I., a branch of computer science, and remains to this day a leader in the field.

The foremost of his achievements is the study, “Common Sense Reasoning,” in which he attempted to formulize a logic of inference on common sense which could endow computers with a reasoning ability comparable to that of human beings. Since the 1950s he has consistently presented new theories and contributed enormously to the development of this field.

Moreover, Dr. McCarthy has written a large number of papers on theories of calculation which are the basis of today’s software science.

In the field of computer engineering, he proposed the basic concept of the Time Sharing System (TSS) and was involved in its development. This work opened the way toward the development of today’s large-scale computers.

In addition to his academic contributions, Dr. McCarthy established the first research project of A.I. at the Massachusetts Institute of Technology in 1958, and was the founder of its Artificial Intelligence Lab. After moving to Stanford University, he also established the A.I. Laboratory there.

He has also served as President of the American Association for Artificial Intelligence since 1983, and has received a number of awards for his contributions to the education of younger researchers and to the development of the association.

For these outstanding achievements, we have selected Dr. John McCarthy as a laureate of the Kyoto Prizes.