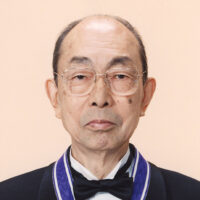 Member, The Engineering Academy of Japan

Half a Century’s Journey in Research: Applying Physics for the Benefit of Society

Semiconductor Laser - Continuous Operation and Progress for the Future -

Dr. Alferov, Dr. Hayashi and Dr. Panish have made pioneering contributions to the development of optoelectronics as we know it today with the achievement of continuous wave operation of semiconductor lasers at room temperature. They have thus paved the way for commercial use of electronic devices that play an essential role in the building of information infrastructures supporting the worldwide IT revolution.

In 1970, Dr. Zh. I. Alferov, Dr. I. Hayashi and Dr. M. B. Panish achieved continuous operation of semiconductor lasers at room temperature, an operation which theretofore had been extremely difficult. Their feat paved the way for the practical uses of semiconductor lasers, a pioneering contribution to the development of the optoelectronics that are an essential component of the information infrastructures that underpin the worldwide IT revolution.

The first semiconductor laser, accomplished in liquid nitrogen in 1962, utilized a homojunction based upon a GaAs layer. However, its requirement of threshold current density, the minimum density necessary for lasing operation, was extremely high, thus permitting pulse operation only and hindering the industrial application of these semiconductor lasers. A variety of subsequent attempts were made to confine light output in an optical waveguide using striped electrodes or a heterostructure of AlGaAs and GaAs layers, but numerous technical bottlenecks yet prevented continuous operation at room temperature. A breakthrough occurred in 1970, when Dr. Alferov in Russia (formerly the Soviet Union), and Drs. Hayashi and Panish in the United States, almost simultaneously succeeded in achieving the continuous operation of semiconductor lasers. The semiconductor lasers they developed are characterized by the fact that they substantially reduced the threshold current density through the application of a double heterostructure consisting of a GaAs active layer, a thin film for radiating light, sandwiched between two AlGaAs layers.

This epoch-making development provided the basis for several subsequent research efforts and paved the way for the practical application of semiconductor lasers. These lasers were then applied to a number of new technologies, accelerating the development of the optoelectronics field that has given birth to a revolution in industrial and social structures worldwide.

Today, semiconductor lasers can be found not only in the optical fiber communications that connect us to the world via the Internet, the major driving force in the realization of the information society, but also in optical recording technologies such as compact disc players and video disc players, information processing components such as computer memory and laser printers, and media resources such as digital publications.

The continuous operation of semiconductor lasers at room temperature, attained by the three scientists using an AlGaAs double heterostructure, gave birth to an entire class of innovative technical developments. It is no exaggeration that the prosperity of the optoelectronics field as we know it today would not have been possible without their groundbreaking achievement.

For these reasons, the Inamori Foundation is pleased to bestow upon Dr. Alferov, Dr. Hayashi and Dr. Panish the 2001 Kyoto Prize in Advanced Technology.