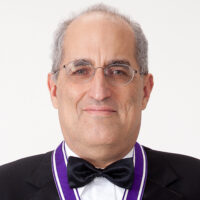 Adventures in Physics and Math

String Theory and Mathematical Sciences in the 21st Century

Dr. Witten has made significant contributions to theoretical physics for more than 30 years as a leader in the dramatic evolution of superstring theory. Moreover, by applying his physical intuition and mathematical skills, he has advanced mathematics, and prompted the cutting-edge research of many mathematicians. His achievements are both unique and outstanding.

A look into the progress of quantum field theory and string theory reveals a spectacular drama featuring a large cast of talented scientists. Beginning with the problem of reconciling the theory of general relativity with quantum mechanics, they dream of a theory that would unify the entire spectrum of mechanics, from the theory of elementary particles to macroscopic cosmology. Highlighting this story are the discovery of new elementary particles and the pursuit of innovative mechanical theories. In this continuing drama—particularly over the past three decades—Dr. Edward Witten has assumed a leading role.

In the expansion of the “first superstring revolution,” the great advance in superstring theory started in 1984, Dr. Witten’s geometric analysis of anomalies in gauge fields and gravity fields theory served as an important motivation. Meanwhile, his study of the compactification of strings illuminated a way to the mathematical elucidation of the relationship between superstring theory and the standard model of particle physics. In 1995, Dr. Witten proposed M-theory, which united all of the five different 10-dimensional superstring theories into one theory. This discovery ignited the “second superstring revolution,” in which he played the leading role.

Dr. Witten has made significant contributions not only to the theoretical physics but also to the pure mathematics. His penetrating physical intuition and advanced mathematical skills have prompted many mathematicians to tackle new research topics. He has inspired new research themes in geometry, by the quantum theoretical interpretation of the Morse theory in differential geometry and his use of the Calabi-Yau manifolds in the string compactification. He has shed light on the relation between the Chern–Simons gauge theory and the Jones polynomials in the knot theory and provided new perspectives on both. His other important contributions include the low energy solution to supersymmetric gauge theory and its applications to topology (the Seiberg–Witten theory). Furthermore, he has provided theoretical evidences for the gauge theory duality (the Vafa–Witten theory) and clarified its relationship to the geometric Langlands correspondance, and his formulation of the Gromov–Witten invariant and study of mirror symmetry opened new lines of research. Today, each of these achievements is highly regarded among mathematicians.

In the 1970s, Dr. Freeman Dyson lamented the deep alienation between theoretical physicists and mathematicians. After 1980, however, it was recognized that a renaissance had begun in the exchange of knowledge between pure mathematics and theoretical physics. Dr. Witten has played a remarkable role in sparking that renaissance.

For these reasons, the Inamori Foundation is pleased to present the 2014 Kyoto Prize in Basic Sciences to Dr. Edward Witten.