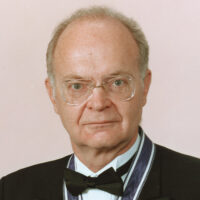 A computer scientist who has made innumerable contributions to the development of the 20th century information sciences through research and education. In addition to systematizing the field of software science and creating foundations, Dr. Knuth has achieved great results in a broad spectrum of research ranging from the basics of algorithm analysis to designing programming languages and developing information processing technology for practical application in computers.

Dr. Donald Ervin Knuth has made innumerable contributions to the development of the 20th century information sciences through research and education. In addition to achieving great results in a broad spectrum of research, ranging from the basics to the practical applications of computers and information sciences, he systematized field of software science and creating its foundation.

Dr. Knuth systematized the fundamental algorithm related to computer processing. He also created the basis for computer algorithms by establishing the method of numerical computation which, as a seminumerical algorithm, is compatible with the internal machine arithmetic operations of computers. These achievements are compiled in his three – volume work, The Art of Computer Programming which is both a classical textbook and a dictionary, and is even considered a bible of algorithms that provides deep insights into the inherent meaning of algorithms and related issues. His work led to the establishment of the algorithms that form the core of diversifying individual specialized systems, contributing greatly to research and education in software science. Dr. Knuth has also maintained that a computer program should be legible as a document and easily utilized by a third party – a concept he realized by producing the WEB system which integrated programming with program documentation. His extraordinary insight exhibited in his works, such as Literate Programming, have influenced the entire field of information science.

Moreover, Dr. Knuth developed the “TEX” computer typesetting system and “METAFONT” font design system as a documentation technology for preparing high-quality computer printed literature. This technology permitted the output of easy-to-read programs while establishing a method of document preparation, including the printing of complex formulas and logical expressions, the management of reference documents, and document layout. In so doing, this achievement has led to the establishment of document technology as a new field in information sciences.

These systems are currently used throughout the world for document preparation in the European languages as well as in Japanese and Korean. TEX is also used to publish treatises of the American Mathematical Society and other academic societies. In this way, Dr. Knuth’s work has greatly influenced not only those specializing in the information sciences, but many other academic – as well as the general public. It may be said that the development of these systems is the most important invention in document preparation since Johannes Gutenberg invented movable type printing press.

Dr. Donald Ervin Knuth has helped support this century’s rapid development of the information sciences, especially during the 1970s and 1980s when he established the solid foundation for this field and provided firm directions and practical technologies for its further development.

Therefore, the Inamori Foundation is pleased to bestow upon Dr. Knuth the 1996 Kyoto Prize in Advanced Technology.