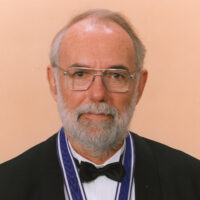 Gardenification of Wildland Nature and How to Absorb the Human Footprint

Conservation of Biodiversity:Pratice and Theory

Pioneering Study of Biodiversity in Tropics and Its Maintenance Mechanisms

As a pioneer of tropical biology, Dr. Janzen has formulated a large number of unique hypotheses, including mutualism for defense against predators and predation as a basis for biodiversity, making significant contributions to the flourishing of tropical ecology. Applying his special knowledge to practical situations, he has also been active in biological and environmental conservation in the tropics.

With his profound and extensive knowledge of tropical forests, Dr. Janzen has also been active in the conservation of tropical environments.

In recent years, information concerning tropical life has been compiled through intensive surveys at some research facilities in the tropics, resulting in the clarification of the statuses of numerous biological species existing in tropical forests, and their mutualism.

These findings have stimulated investigation of the tropical ecosystem and its evolution. Dr. Daniel Hunt Janzen is a pioneer and most active promoter in this field.

By demonstrating mutualism for defense against predators between acacias and ants and by hypothesizing predation as being the basis for the great biodiversity in the tropics, Dr. Daniel Hunt Janzen greatly influenced researchers grappling with the problem of cohabitation of multiple species in the 1970s, and promoted the development of tropical ecology. As the leader of modern tropical biology, he studied mutualism between bees and orchids, and also hypothesized that the simultaneous flowering and seed dispersal in some plants corresponds to their strategy for survival by satisfying the hunger of seed – eaters with rich food. Other unique hypotheses he formulated include those that explain “why tropical rivers are brown in color” and “why individual tropical trees of the same species are distributed away from each other.”

In the last half of the 1980s, Dr. Daniel Hunt Janzen became involved in a project to establish a national park in an area of forest which included an abandoned ranch in Guanacaste on the Pacific coast of Costa Rica, and also sounded an alarm bell to warn about the possible loss of tropical biodiversity. In 1991, the year before the “Earth Summit” at Rio de Janeiro, he pressured the Costa Rican government to found the National Biodiversity Institute (Instituto Nacional de Biodiversidad, INBio). The institute’s primary objective is to inventory all organisms of Costa Rica on the basis of specimens collected throughout the country. The institute has nurtured a large number of domestic researchers and technicians, and is also involved in DIVERSITAS, an international research program of biodiversity science.

In short, Dr. Daniel Hunt Janzen has not only stimulated the development of ecology and a wide range of other biological studies, but has significantly contributed to the understanding of today’s environmental problems, through his pioneer studies and unique and persuasive ideas and activities based thereon. For these reasons, The Inamori Foundation is pleased to bestow upon Dr. Daniel Hunt Janzen the 1997 Kyoto Prize in Basic Sciences.