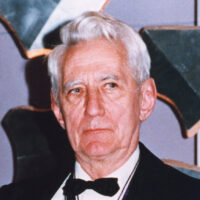 Development of Communication and Computing, and My Hobby

The creator of information theory. In the late 1940s, he established a mathematical method to analyze the quantity, reliability, transformation, and equivalence relations of information, and laid the foundation for remarkable developments in today’s telecommunications.

Communication technology is one of the technologies which has made the most remarkable progress in this century and produced significant effects in a wide range of human life. It is expected that the problems concerned with information and communication will become increasingly significant in the coming century.

Prof. Shannon not only established an entirely new field of mathematics and showed a clear guideline of research and development, but also discovered the most important concepts and techniques in the field and, moreover, proved the most fundamental theorems concerning the stage of present development. It is rare to find a mathematical scientist who has accomplished such an epoch-making achievement in the long history of science.

The concepts which Prof. Shannon formulated, especially those of information entropy, are fundamental in information theory, and Shannon’s Coding Theorems are still known as the most important results in this field.

Prof. Shannon’s theory and ideas on information, the applications of which are, needless to say, brilliant in communication technology, have also had much influence on a wide range of quantitative sciences including computer science, linguistics, biology, and psychology.