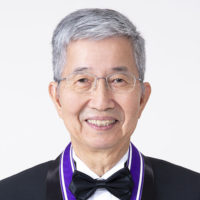 Dr. Tang studied light emission processes in electrically-driven organic materials and invented a new device structure in which two carefully-selected materials were stacked, allowing for high-efficiency light emission at low drive voltages. This pioneering work has led to the practical use of organic light-emitting diodes (OLEDs) and their widespread application in displays and lighting.

In the 1960s, a group of organic materials was discovered to emit light when a high voltage is applied across them. The discovery of this electroluminescence (EL) inspired further research toward the development of organic EL devices, also known as organic light-emitting diodes (OLEDs). Nonetheless, the emission efficiency remained low (approximately 0.1%), and the drive voltage required for EL remained high (several tens of volts). These issues hindered any practical application of EL.
In 1987, Dr. Ching W. Tang invented a new EL device structure consisting of a stack of two carefully-selected organic semiconductor layers. He demonstrated that this structure allows an efficient ﬂ ow of electric current and enables efficient light emission from the interface region between the two layers (1), even when the applied voltage is set as low as several volts. This innovation paved the way for the birth of practical OLEDs.
Dr. Tang’s new device structure consists of an aromatic-diamine hole-transport layer, in which the holes carry the current, and an 8-hydroxyquinoline-aluminum (Alq) electron-transport layer, in which electrons carry the current. Dr. Tang set the hole transport layer as thin as 75 nm and the electron transport layer as thin as 60 nm to reduce the electrical resistance of the device. Moreover, the cathode on the Alq layer was made using a magnesium-silver alloy to ensure both efficient electron injection and chemical stability (1). This new structure allowed the device to be driven by a voltage of less than 10 V, and the electrons and holes recombined with each other efficiently, resulting in light emission with efficiency above 1%.
To further increase the emission efficiency of OLEDs and to control the wavelength of the emitted light, Dr. Tang also invented a more advanced device structure in which a part of the Alq layer was doped with highly ﬂuorescent molecules. By optimizing the position of the doped layer and its dopant concentration, he achieved a two-fold increase in the efficiency and spectral control of the emitted light (2). These works promoted the development of new materials and device structures for OLEDs, resulting in drastic improvements in their efficiency and reliability. They have enabled the realization of practical OLEDs and facilitated their widespread use in displays and lighting.
Thus, Dr. Tang paved the way to the birth of OLEDs and their applications by presenting the material design guideline and the basic device structure, which are indispensable to achieve significant improvements in OLED efficiencies. These works are pioneering in the fields of materials science and electronics and have greatly contributed to the society.
For these reasons, the Inamori Foundation is pleased to present the 2019 Kyoto Prize in Advanced Technology to Dr. Ching W. Tang.